36th birthday in The Netherlands To celebrate my 36th birthday, spent a long weekend with my friend Kathrin in The Netherlands. I woke up at 4:45 in the morning on Friday in order to catch my flight. I slept on the very short flight to Schiphol Airport and caught a train to Leiden, where she lives. We took a walk around Leiden and had brunch at the Bagels & Beans cafe on Maarsmansteeg. Then we caught the train into Amsterdam for some sightseeing. After a nice walk around the center of the city, we ate a late lunch at Wagamama and then looked at the many masterpieces in the Rijksmuseum. We also looked at several photo exhibitions at FOAM, the Photography Museum of Amsterdam. Before returning to Leiden, we had a couple of beers at trendy Asian restaurant and then one more round at a tiny corner pub beside the canal.

On Saturday we saw some museums in Leiden, including the National Museum of Antiquities. The Egyptian artifacts there were simply amazing, and I posted some photos of a few of them. There was also an exhibit of aerial photos from Iran that was very interesting. In the evening we took a train to The Hague and ate dinner at Pastis, a charming French restaurant downtown. Then we took in a film, the latest in the Bond franchise.

On Sunday we went to the beach, where we were treated to sunshine for the first time in the weekend. It was there that Kathrin took the excellent photo of me above. After a long and eventful weekend, I flew back to Zürich late last night. I have uploaded photos from the weekend in a new set entitled The Netherlands, November 2008.

Lift every voice and sing!

Wonder, joy and hope!
I just watched John McCain concede defeat to Barack Obama. I’ve spent the past seven hours watching the election returns along with a few hundred other people here in Zürich: Americans, Swiss, and folks of many other nationalities.
In a few short months, Barak Obama will become the forty-fourth president of the United States of America. President Obama will be the leader of all Americans. The nation and world face tremendous challenges; here’s hoping that the supporters of John McCain will heed his call for unity.
Posted by Michael A. Lowry at 05:25 1 comments

I’m with a group of Americans and others interested in the American election. We’re all gathered at a sort of community center that seems like the sort of place typically rented out for parties, conferences, and similar gatherings. It’s not too far from my new home in Zollikon, so I can walk home if I decide not to wait for the first tram around 5 o’clock. I think I will stick it out. In addition to a bar, there are two big screen TVs showing non-stop news of the election, in both English and German. There’s food, drink, company, and the most exciting political event in a generation. Fun!
Posted by Michael A. Lowry at 00:52 0 comments

ZRL in the snow Last week the rain progressed to slushy freezing rain and eventually gave way to thick clumps of wet snowflakes. What resulted was a record amount of snow for this time of year in Zürich. I took a few photos of the lab in the snow, including some shots from the roof of the main building.

My office is located on the ground floor of the K building, the three-story building most distant in the above photo. The Nanoscale Exploratory Technology Laboratory announced recently will be built in the field to the right of the K building. Groundbreaking is scheduled for early next year. Today the moving company arrived with my boxes from Sweden. They’ve been sitting in a storage facility here in Zürich for the past few weeks while I sought a place to live. Before the whole place filled up with boxes, I went through and took a few photographs. Pictured above is the study on the East side of the house, facing the hillside.

Tomorrow night, I’ll go to a party with a bunch of Americans. We’ll stay up and watch the results of the U.S. presidential election. Wednesday I’ll rest and unpack. I have already unpacked my computer and some clothes, but there’s a lot more to go.

I’m spending my first evening at the house in Zollikon. 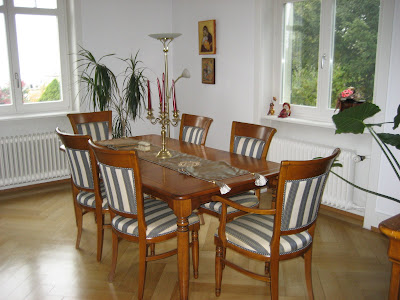 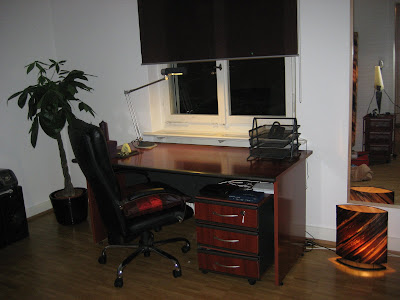 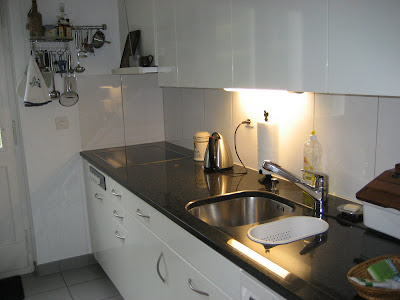 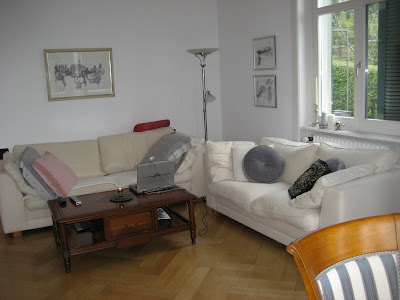 And finally, the living room.
I’ll take more photos tomorrow. Now I’m off to bed.
Posted by Michael A. Lowry at 01:13 2 comments