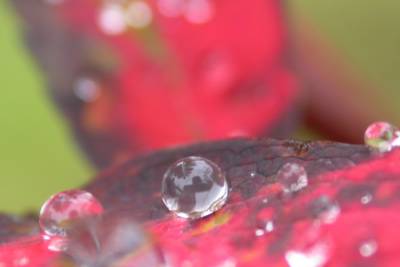 On the way to work I saw this lovely sight: morning dewdrops on the first red leaves of autumn.
Posted by Michael A. Lowry at 10:15 0 comments 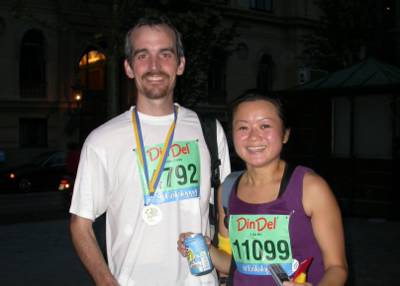 Here's a photo of me and Lisa after the race. Each runner got a free Fanta, cinnamon roll, and banana. I was still full from lunch!
Posted by Michael A. Lowry at 23:17 1 comments

I completed the 21 km race in 1 hour and 56 minutes. That's not a great time compared to the really good runners -- they finished in about an hour. But it's a great time for me! This was my first race and the first time I have run more than about 16 km; so I'm pleased with the result. A few minutes into the race I caught up with Lisa. I ran with her for a bit but then passed her when I fell into my regular pace. There were lots of folks along the way cheering us on, including some friends of mine. I saw Åsa and Kevin twice early in the race. Thanks for the cheers, guys! I also saw Inger when I passed the bridge to Riemersholm near Hornstull. I think I was pretty exhaused by that point, and it was nice to see a friendly face! The last 4 kilometers were really hard and I felt like I absolutely had to stop; but somehow I managed to keep going. Thanks to my fellow runner who yelled "Kom igen nu!" when I slowed down to walk for a bit during the last kilometer; I had contented myself to walk the rest of the way and aim for a time of just under 2 hours. I was so exhausted that this seemed preferable to running any farther. But after hearing her shout of encouragement I started running again and probably shaved a couple of minutes off my time. Running is 20% physical and 80% psychological, so cheers and shouts of encouragement really do help! Lisa ran the race in only 1:58 despite having a cold. Bravo, Lisa!

The new shoes worked well, but I did get some small blisters on the edge of the balls of both feet. Perhaps the shoes are a bit too narrow; or perhaps I just need to put some surgical tape on the areas where I got blisters the next time I run such a long distance. In any event, the blisters I got with these shoes on a run of 21 km are not as bad as the ones I got with my old shoes on a run of 12 km; so I consider the new shoes an improvement. I was lucky that the shoes worked so well the first time I ran any significant distance in them.

I had another problem that was quite frustrating: I ate too much for lunch, and too late in the day. I had four big breakfast tacos around 13:30, and the race began at 17:10. The tacos attempted to escape my stomach on several occasions during the race. As a consequence I had to slow down periodically to let my stomach calm down. I also didn't dare to drink very much of the water and sports drink that was on offer at several points along the race course; drinking only seems to make a full stomach a bigger problem. Next time I'll have a big breakfast early in the morning and then just have a couple of pieces of fruit for lunch.

I am absolutely beat. I am probably more exhausted than I've ever been. This definitely tops the 12 mile backpack to Black Mountain Camp at Philmont. At least on that hike we had all day to do it! The race was very hard, but I am glad I did it. I think if I run more regularly and try to run longer distances at least once a week the next race will be easier. 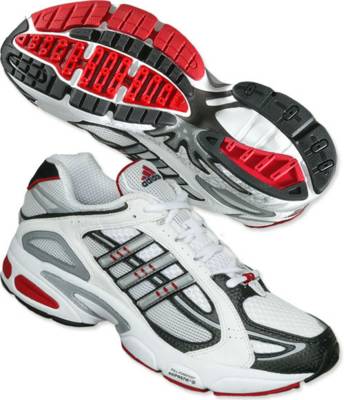 I got some new running shoes for the race tomorrow. They were expensive but they feel really good. The thing like most about them is their good arch support. My other shoes don't provide quite enough support under the arch of the foot, and I tend to get a blister from the resultant chafing during runs longer than 10 km. With any luck these new shoes will eliminate that problem. They're called Adidas Supernova Control. I bought them at Löplabbet for 1100 SEK. Like I said, not cheap. The same shoe can be found for less elsewhere, but the guy at Löplabbet was very helpful so I don't mind spending a bit more. The shoes have some fabric sections on the sole that look like vents. Whether they're actually vents or not I don't know; they could be just decoration. I hope the fabric doesn't absorb water; that could make the shoes heavy. The forecast for tomorrow is for excellent weather, around 20 degrees C and sunny.
Posted by Michael A. Lowry at 10:06 0 comments 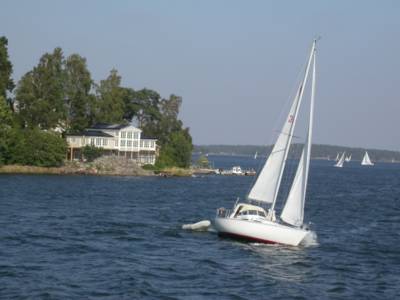 Here's a view from the ferry this afternoon, returning from Tobbe's bachelor part. We spent the evening yesterday on Edö in the northeast part of the Stockholm archipelago. It was absolutely lovely, especially today. It was a perfect day.
Posted by Michael A. Lowry at 19:51 1 comments

The best hope for democracy

In Governor Schwarzenegger's speech at the RNC last night, he said:

"If you believe this country, not the United Nations, is the best hope for democracy, then you are a Republican."

For all the applause he got, it seems the audience overlooked the fact that Schwarzenegger's comment was profoundly anti-democratic. The clear implication of his comment is that one nation is better suited to deliver democracy to the world than a democratic assembly of all nations. History has not borne out this theory.

The cannot offer the hope of democracy to the world by force. The ongoing occupations of Afganistan and have left the besieged inhabitants of the region more hostile to the liberal Western ideal of democracy. These actions have also turned world opinion against the .

No single nation can be the best hope for democracy.

If the wishes to foster democracy in the world, it must lead by example. It must work through the U.N. to form a concensus when its interests are at stake; and if the fails to win the day through the democratic process, it must submit to the will of the world body. The policy of the should be never to take unilateral military action unless its survival is at stake.