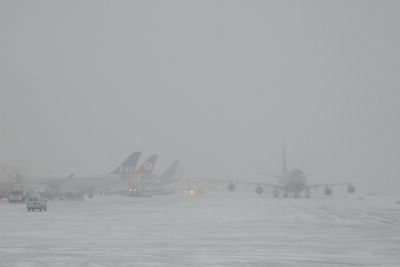 When I flew through Chicago on the way home from to Stockholm, my flight from Austin to Chicago was delayed due to a big snowstorm there in Chicago. By the time my plane landed in Chicago, it seemed too late for me to catch the SAS flight to Stockholm. My AA flight from Austin taxied by the international terminal on its way to its gate in a different terminal. In the distance through the snow, I could see the SAS plane I needed to catch. But by the time I had gotten off the plane, gotten through the terminal, taken a train to the international terminal, gone back through security, and made my way to the gate where the SAS plane was, it had already left. I had to wait six hours in the Chicago airport for the next SAS flight, a 10:30 p.m. flight to Copenhagen. This also meant that I had to catch yet another flight from Copenhagen to Stockholm. As a result, I arrived home in the evening on the 6 January instead of the early morning. C'est la vie. 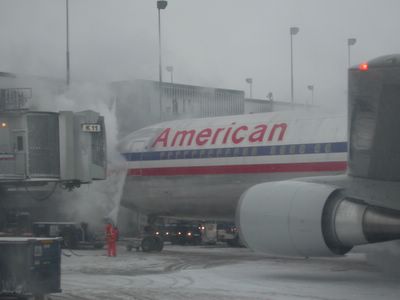 There was a lot of snow falling in Chicago, so the de-icing crews were out in force.
Posted by Michael A. Lowry at 06:34