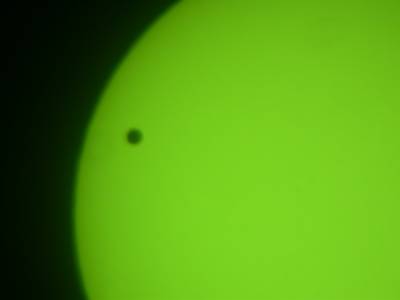 Here are some photos I took of the transit of Venus. It was cloudy here in Stockholm during the morning, but I was able to catch the last hour of the transit. I took the photos using a 5-inch Tasco Starguide telescope and a Nikon CoolPix 4500 camera. Three of the photos were taken directly by placing a piece of dark green welder's glass between the telescope eyepice and the camera. The last photo was taken by projecting the image from the telescope eyepiece onto a piece of paper.
Posted by Michael A. Lowry at 15:47