Backed by IBM, the new World Community Grid announced today is an ambitious effort to harness the power of grid computing for the public good.

Here is a brief desciption from WCG's web page:

World Community Grid's mission is to create the largest public computing grid benefiting humanity. Our work is built on the belief that technological innovation combined with visionary scientific research and large-scale volunteerism can change our world for the better. Our success depends on individuals - like you - collectively contributing their unused computer time.

I downloaded and installed the WCG agent software. While it's running, CPU usage is near 100% and my ThinkPad's cooling ran runs non-stop. The emphasis on the colors orange and blue in the client program suggests to me that the software was designed by the same people who wrote the downloadGrid client -- another grid computing project from IBM. 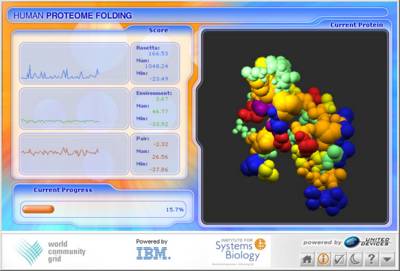 A screenshot of the World Computing Grid agent performing work for the Human Proteome Folding project.

Currently, the software runs only on Windows/x86. Given the prevalence of this type of computer, it makes sense to release the software for this platform first. One hopes that the developers see the wisdom of porting the software Mac OS X, Linux, and other platforms. The WCG Forums have some discussion about this.