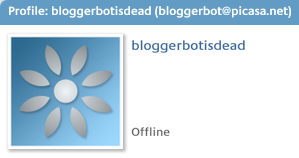 Today, BloggerBot was deactivated. It has been widely known for a while that the end was near, but BloggerBot's final demise is nonetheless disappointing.

Since 2004, I have posted photos to my weblogs using Hello and BloggerBot. The interface made quick work of the job of uploading a series of photos and providing a short caption of each one.

Nothing Google has provided offers the same simple way of uploading photos to a blog. For this reason, I have stopped posting many photos to my blogs, and have started posting them to flickr instead.

BloggerBot was a useful tool, and I'll miss it. I hope the good folks at Google are working to make improvements the remaining systems, so that uploading photos is again as easy as it was with BloggerBot.
Posted by Michael A. Lowry at 04:17

Great pictures! I was just doing a little surfing to see how others are posting photos to Blogger blogs without Hello/Bloggerbot and ran across your blog (glad I did). I think I'm going to give flickr a try. Cheers.