Ever since running the Stockholm Marathon two summers ago, I've gotten pain in my knees when running long distances. The orthopedic specialist I visited a few weeks ago believes he knows what the problem is, but he wanted me to get an MRI of one of the knees just to confirm his diagnosis. So early this morning, I went to Sabbatsberg Hospital to get an MRI taken of one of my knees. 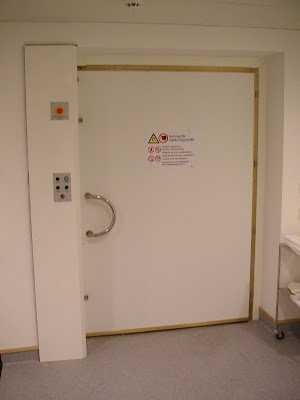 The sign on the door into the room housing the machine warns that metalic objects should not be brought inside the room. Along the edges of the door and the door frame are flexible strips of copper, no doubt completing a Faraday cage around the entire room when the door is closed. 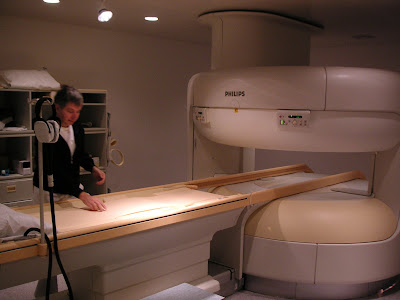 The MRI machine used to take the pictures of my knee was a Philips Panorama 1.0T; according to the operator it's the first of its kind to be installed in Skandinavia, and it cost fifteen million Swedish crowns.

It's big and loud. The noise is something I didn't expect. Plus, the whole aparatus vibrates and pulses when in operation — bit unsettling at first. After a while though (each image took 3-4 minutes to capture), the droning and throbbing of the machine became soothing, almost hypnotic.

I ordered copies of the data files produced in the examination, and hope to have them tomorrow.
Posted by Michael A. Lowry at 10:41

ohhh nooooooooo we paid to kill your knees, we are mean people...