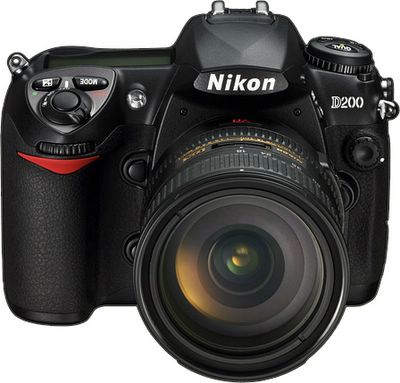 For many years, I have wanted to buy a single-lens reflex (SLR) camera — called a system camera in some countries, including Sweden. Until recently, I have been unable to justify the expense. When one purchases an SLR, one must also purchase at least a couple of lenses to go with it. The better lenses can cost hundreds or more; when a flash and accessories are added, the total can come to several thousand dollars. Also, when one buys a camera and some lenses for it, one locks oneself into that particular manufacturer's lens mounting system. In other words, lenses from one manufacturer typically cannot be used with cameras from another manufacturer. So the purchase of an SLR is not a decision I take lightly.

About a month ago, Nikon announced the new D200 digital SLR camera, and I think I'm going to get one. The D200 offers a lot of capability for the money, and after using a Nikon CoolPix 4500 for a few years I would definitely consider buying another Nikon.

Ideally, I would like the Canon EOS 5D because it has full frame 35mm sensor. Like most DSLRs, the Nikon D200 has a smaller 28mm-wide sensor and my initial feeling was that a smaller sensor was inferior to a full-sized 35mm sensor. However, the Canon EOS 5D costs at least $3000, putitng it well beyond my means. Other SLRs with full frame sensors are even more expensive, so if I'm going to get an SLR now, I'll have to settle for one without a full-frame sensor.

I did some reading online to familiarize myself with the debate. Digital Photograhy Review has a good discussion of the pros and cons of full-frame versus cropped sensors. DPReview also has a good preview of the D200.

At first I thought it would be a good idea to purchase normal 35mm lenses so that I can use them with any Nikon 35mm SLR camera, including any future Nikon DSLR that incorporates a full frame 35mm sensor. My plan was to get the following lenses to go with my D200:

Kit 1
Notably absent from this list are a good zoom lens and a high power telephoto. I could of course add these later as funds become available. If I purchase these lenses online when I'm in the U.S., I can get all four for under $1000. This would be a very respectable starting kit. and would be suitable for many kinds of photography. However, lacking a zoom lens, the setup would not be well suited to impromptu shots or tourist photography.

Photographer and confessed Nikon afficionado Ken Rockwell doesn't believe Nikon will produce a camera with a full-frame 35mm sensor. For reasons primarily related to cost, he argues that smaller sensors have advantages. Rockwell praises the D200, and is convinced that the fleixbility and portability of the smaller DX lenses are worth the drawbacks. Rockwell is especially fond of the new 18-200 VR.If I buy regular 35mm lenses but only use them with DX cameras, it could be considered overkill. With this in mind, I reevaluated my selection of lenses above, and came up with an alternative set:

The 18-200 zoom offers a wider range of focal lengths than the four lenses above, but it's not as fast (bright). The speed drops off quite a bit at longer focal lengths, and it's for this reason that I decided to include the 105mm macro lens in this set instead of the 60mm one. This way the macro lens could double as a telephoto in low light situations. Still, it wouldn't be as fast as the 80mm one from the first list. Nikon claims that the vibration reduction (VR) feature of the zoom lens makes the lens act like its two f-stops faster. The weight savings are not really significant: with these two lenses, I'd save just 200g over the four lenses above. Together, these two lenses would cost a couple hundred dollars more than the four lenses above. The DX zoom lens will only work with the current crop of Nikon SLRs; so if Nikon does release at some point in the futre an SLR based on a full-frame 35mm sensor, this lens (like all DX lenses), would not work with that camera. Even so, I imagine that if the market does eventually move toward full-frame 35mm sensors, the prices of these cameras will come down to the point at which one would be affordable to me. At that point, I could sell my D200 and any DX lenses I have.

I'd love to get input from other folks out there who have more photographic experience.
Posted by Michael A. Lowry at 12:10

They're both good kits; the second one seems like the better choice for now, though, unless you really never see yourself needing a wide angle. The VR on the new lens is supposed to be excellent (more than two stops), though of course it doesn't stop subject motion. The only reason to not get DX lenses is if you use film cameras, too -- otherwise the resale market for all Nikkors is very strong, so it's not like you'd be losing much money.