I installed Apple's Boot Camp beta software on my Mac Pro soon after it was released. This software allows one to run Microsoft Windows on an Intel-based Mac. The Boot Camp Assistant program lets one repartition an existing HFS+ volume, adding a FAT32 or NTFS partition to the disk without damaging the existing HFS+ partition.

I used this software to repartition a 500 GB drive into two equally-sized partitions: one HFS+ partition, and one NTFS partition. I then installed Windows XP SP2 on the NTFS partition. Everything worked fine for a while. But then the Boot Camp volume stopped showing up in the Startup Disk pane of the System Preferences program. What this means is that Startup Disk was no longer seeing a bootable operating system on the NTFS Windows XP partition. 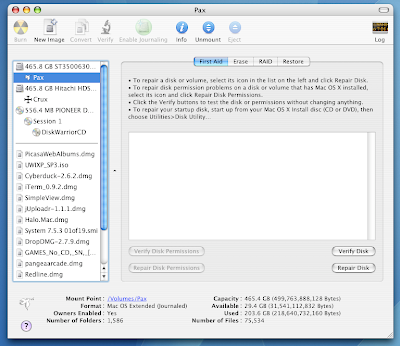 I am sure that reformatting the entire drive would fix the problem, but I would rather not take such a drastic step yet. I haved posted a new topic to Apple's Boot Camp discussion forum, asking for advice.
Posted by Michael A. Lowry at 23:03