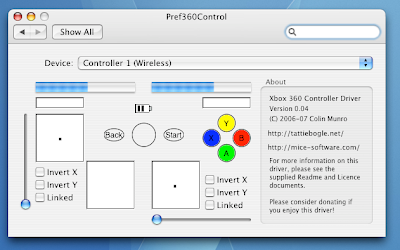 Thanks to driver software developed by Colin Munro of Mice Software, I now have my Xbox 360 wireless controller working with my Mac. I tried out Jammin' Racer and it seems to work okay, even though the controls are a bit too sensitive.

Halo 1.5 is supposed to support gamepads, and indeed the Wireless Xbox360 controller appears in the list of gamepads in the game's settings screen. However, I have not yet figured out how to activate the controller in this game. If I click on it, it moves to the left as though it were active, but when I exit to the settings screen and return to the gamepads screen, it is inactive again. Oh well, I never really liked playing Halo with a gamepad anyway.

MAME on the other hand would be a lot of fun to play with the controller. I think it would be fun to play old arcade games with the analog stick on the controller. Certain games would be better suited to being played this way than others. Some games that come to mind are Star Wars, Paperboy, Centipede, Starblade, Ikari Warriors, and Heavy Barrel. Top-scrolling shoot-'em-ups like Sky Shark and Raiden would probably also work. MacMAME supposedly supports gamepads, but this program is not Intel-native and the project has been more or less dormant since Apple switched to Intel. MAME OS X is a promising replacement, but as far as I can tell, it does not yet support the use of gamepads. Maybe this capability will be added in a future release.

It's nice finally to be able to use my birthday gift from three months ago! Thanks again, Kelly!
Posted by Michael A. Lowry at 10:25