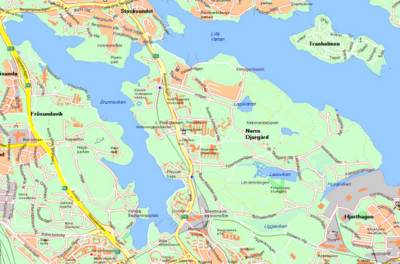 This afternoon I let the cats out and went for a run. I started my run as I usually do, by running South alongside the E18 on the bridge over the channel that connects Brunnsviken to Lilla Värtan. After crossing the bridge, I would normally continue around Brunnsviken; but today I decided to take a longer run so I turned left after the bridge. I ran along Lilla Värtan until I could see Lidngöbron in the distance. I continued running along the shore as far as Husarviken and then turned back Westward toward Stockholms Universitet. When I reached Brunnsviken, I continued my normal jog around the lake.

When I got back around to the west side of Tivoliudden (the peninsula where Pipers Park is situated), I went down to the granite rocks by the water, took of my shoes, and had a swim. It was very refreshing. There was a waterskier out on the lake, and a few people having a barbequeue on the granite hill near Kraus grav. The sun was very low in the sky and the light was lovely. Unfortunately, I didn't have my camera with me. When I got back home, the cats were waiting for me by the door.

I'm just a beginner to running so during the run, I had to slow down and walk from time to time to catch my breath. It didn't help that I had eaten just an hour before starting the run. Next time I'll leave at least two hours between a meal and my run. I'm considering running a half-marathon in September. That's 21 km. I estimate that I ran 16-18 km today, and it took me a bit over two hours. That leaves a lot of room for improvement!
Posted by Michael A. Lowry at 19:00