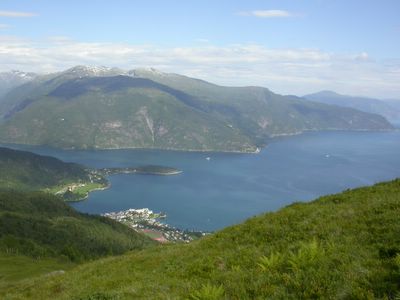 Here's another good view of Balestrand, caught between two ridges. 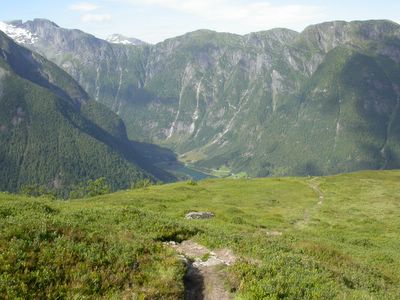 Remember that small branch of the fjord I referred to in the photo taken quayside in Balestrand? Well here you can see the end of that branch. In the foreground is the trail up the peak. If you look carefully you can see a stack of rocks beside the trail in the distance. These marked the trail. 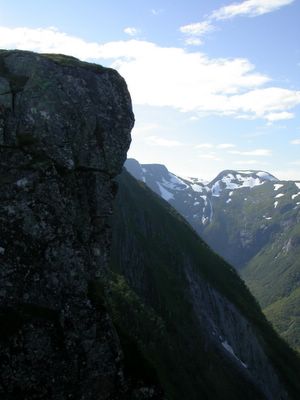 After a bit more the slope to the right of the trail got even steeper. No false steps. 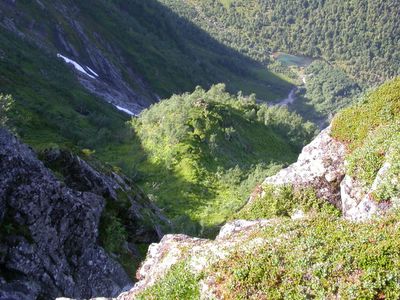 Here's the view down the valley to the right of the trail. It's steeper than it looks. 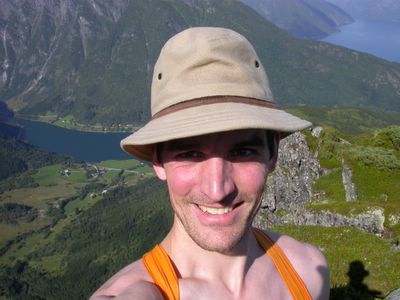 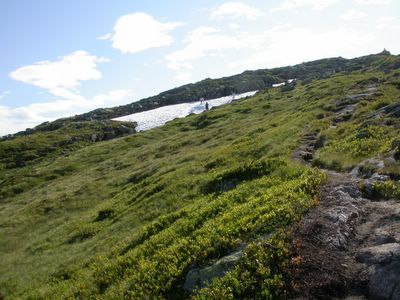 Near the top of the mountain there was a bit of unmelted snow that was attracting the attention of other hikers. 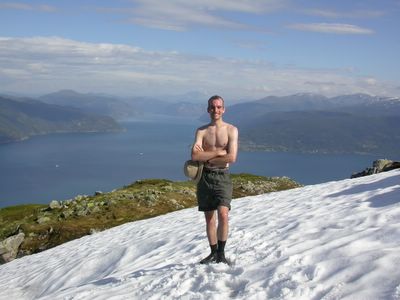 One of them took this excellent photo of me in the snow. 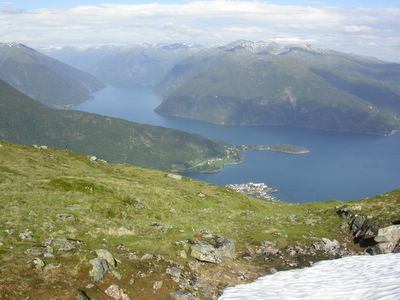 Here's one more view back to the hotel. 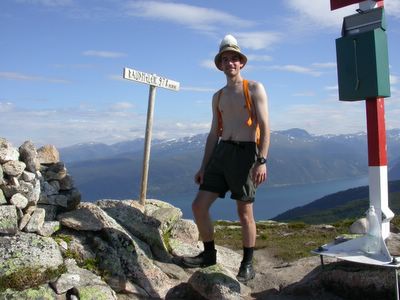 I made it! I put some of the snow on my hat to help keep me cool. It worked really well. It melted slowly as I hiked down the mountain, and was almost gone when I reached the bottom. 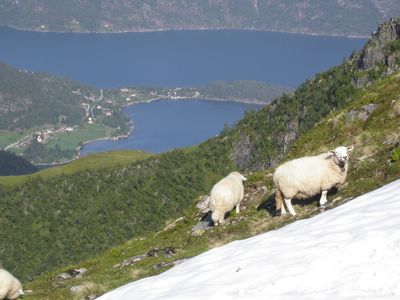 I met some sheep on the way down the other side of the peak. 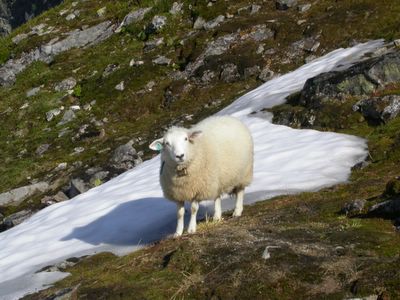 When I came over the ridge, I startled this one. She was quite upset. 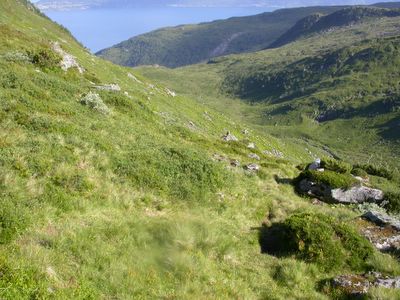 I hiked down the left side of the ridge, along the Kallbacken path. That name means "cold stream," and the path lives up to the name. 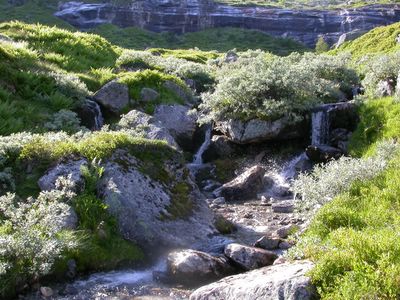 There's a lovely stream at the bottom of the valley, fed by snowmelt from the slopes above. 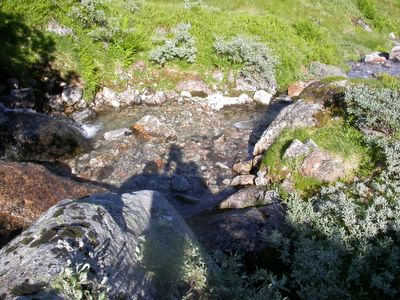 The stream is small, but the water was flowing very quickly. I drank some of the water and refilled my bottle. It was delicious. Hopefully there aren't any dead sheep in the stream above. Actually, I took this photo just a few hundred meters from the top of the mountain, so I think the water was probably safe. 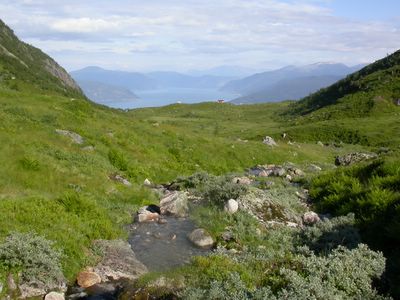 And here's a look down the valley. 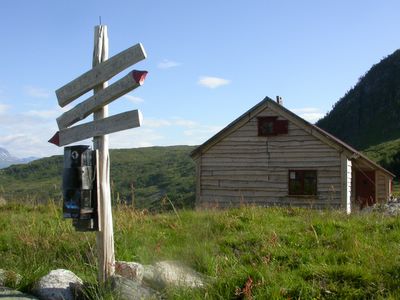 There were three cabins in the valley, in various states of disrepair. 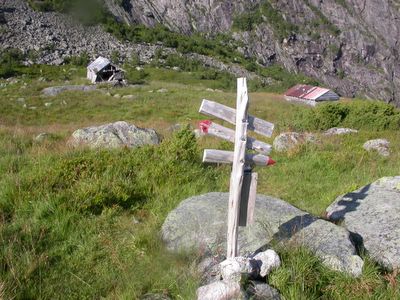 Here are the other two. 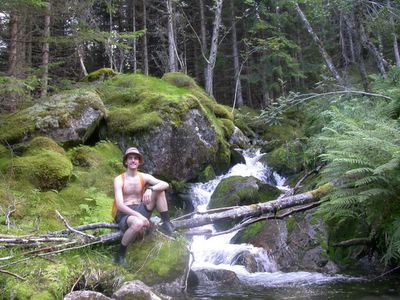 One more waterfall. Maybe I should have worn hiking boots. Oh well — next time. 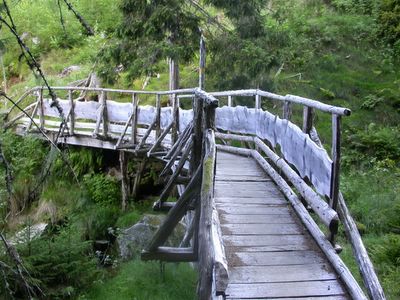 Here's a bridge I crossed on the way back down. I thought itl looked interesting. 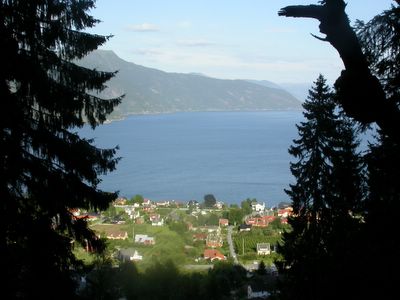 I hiked back along the slope behind the town. 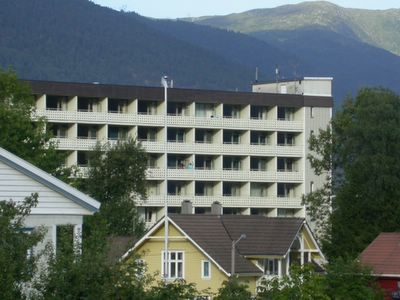 As the hotel came into view, I began to hear the family whistle. I whistled back and took this photo of my parents waving on the balcony of our hotel room. 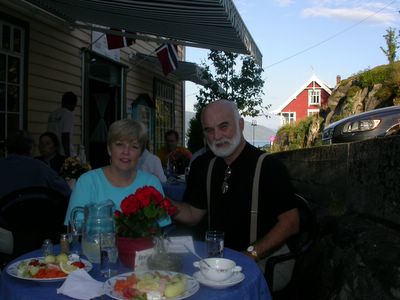 After a quick shower, we walked to a nice little restaurant for dinner. 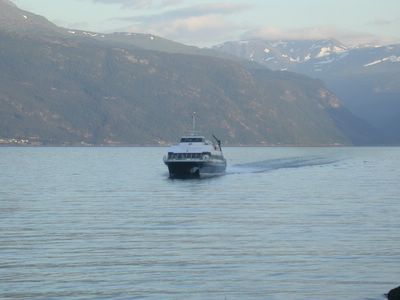 As we walked back along the quay toward the hotel, an expres boat similar to the one we took from Flå arrived to drop off some passengers. 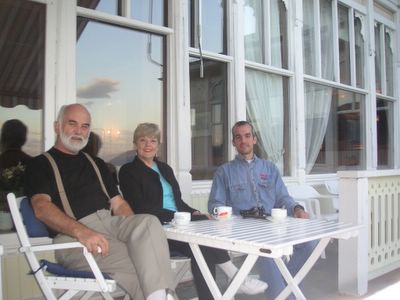 And finally we had a cup of coffee on the back deck of the hotel, and watched the color on the mountains and clouds change as the sun set behind us.
Posted by Michael A. Lowry at 23:37

If you ever get sick of that IBM stuff you should really go serious on photography - these are just awesome photos. Ah Scandinavia...