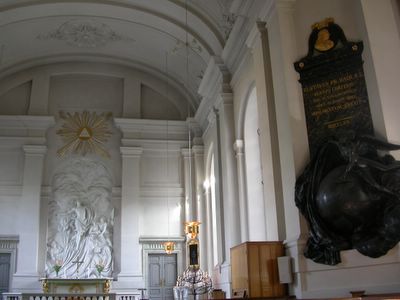 I recently learned that René Descartes was burried for a time at The Adolf Fredrik's Church in Stockholm. Descartes was invited by Queen Kristina to come to Stockholm to be her teacher and adviser. Perhaps in part because he was unaccustomed to the chilly weather, he succumbed to a lung inflamation and died less than a year after his arrival in Sweden. Although he was originally burried in the churchyard here, his remains were moved to Paris 16 years after his death. In the church there is a memorial to Renato Cartesio. Descartes gave us Cartesian geometry and cogito ergo sum.