The new table is in place 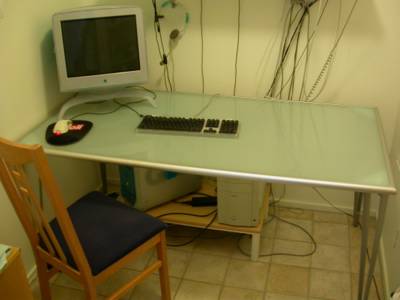 Here's a photo of the new table. I've put one of my displays on top, but I'm not sure if I will add the other display. It's an old 20-inch Apple Trinitron CRT and is very heavy. The table is supposed to be able to hold 50 kg, but I'm not sure if I want to risk it. As you can see, I am using an old Tivoli Systems mousepad. I usually prefer not to use a mousepad, but in this case I don't have a choice: the optical mouse doesn't work on smooth glass.

I plan to buy a Power Mac G5 and a 23" Cinema Displaylater this year. I think they'll match the table very nicely. I may even get two of the 23" displays if I have enough money. If I do that, I'll probably need to put the G5 under the desk. I really must find a way to reduce some of the cable clutter. Perhaps some of that flexible plastic conduit would fit the bill.

Once I have the G5, I won't have much need for the old Power Mac 8500. Right now it's acting as my router/firewall. Because of space/noise/energy considerations, I think I'd rather implement a simpler solution, perhaps using an AirPort Extreme Base Station. I suppose when the time comes, I'll either try to sell the 8500 on eBay or give it to charity. I remember when I first bought that computer. At the time, it was a remarkable computer: it had a 120 MHz PowerPC 604 processor, 128 MB of RAM and a 9 GB Ultra2SCSI hard drive. I remember thinking I'd never need a faster computer, more RAM, or a larger hard drive. How a few years has changed my perspective!

I got a great deal on the system because I was working for Apple at the time. I recall that I paid only $3000 for the computer and $1200 for the 20" display. What a deal!