Ever since it was announced, I have been thinking about getting a Nikon D200 digital SLR camera. Yesterday, I made the purchase.

I have been debating which lenses to buy with the camera. I had pretty much decided to get Nikon's 18-200 VR zoom lens, because it offered a lot of capability at a decent price.
Unfortunately, the lens was in such high demand that it was almost impossible to come by. Even if I could have found a store with the lens in stock, the typical asking prices have been about 100-250 USD more than the street price when the lens was first introduced. Finally, I head from one of the retailers that there were some manufacturing problems with the lens that affected the focusing mechanism; and that Nikon was retooling its production of the lens, with plans to resume shipments in four to five weeks.

The tight supply and concerns about manufacturing defects led me to consider other options. I ended up spending a lot more than I had originally intended to, but I got a kit that I think will be very versatile. 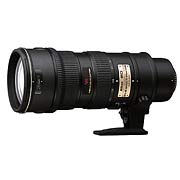 LensesFlash
Accessories
The big item, aside from the camera, is the 70-200 zoom lens. It was expensive. However, from all the conversations I had with photographer friends and from everything I have read about the lens, it seems like a real winner. Only the 18-70 zoom is a DX lens, which means I'll be able to use the other two lenses on any future full-frame sensor camera Nikon may choose to release. Also, the fact that two of the lenses can be used on a wider range of Nikon cameras might make them easier to sell if I decide to part with them later.

I bought the camera, 18-70 zoom lens, memory card and battery from Wolf Camera. The other items I picked up at B&H Photo-Video. Several of the Nikon items have mail-in rebates, so I'll be able to save a little bit of money if I can remember to send in the paperwork. I also got a free HP PhotoSmart 335 printer with my purchase because of a Memorial Day sale Wolf Camera is having this week!

Once I learn how to use my new camera, I look forward to posting more some photographs taken with the camera.