In June of 2006, I bought a new Nikon D200 digital SLR camera and several lesnes. Most of the photos posted to my weblog since then were takne with the new camera.

I had originally intended to buy Nikon's impressively versatile 18-200 VR zoom lens, but it was in short supply so I ended up getting the much faster (but also much heavier) f/2.8 70-200 mm VR zoom. Below is a photo of the D200 with this lens attached. 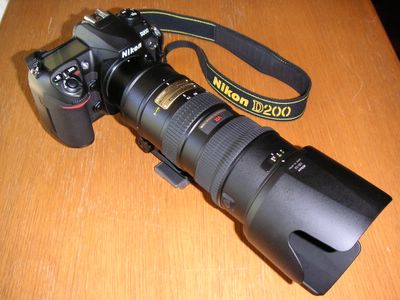 And here is a more-or-lest complete list of what's in my camera bag today.

CameraLensesFlash
Accessories
Only the 18-70 zoom is a DX lens, which means I'll be able to use the other two lenses on any future full-frame sensor camera Nikon may choose to release. Also, the fact that two of the lenses can be used on a wider range of Nikon cameras might make them easier to sell if I decide to part with them later.

I should clarify that the 70-200 zoom does not fit in the 100AW camera bag. I bought the smallest of the Sealth Reporter series, and it's too small to accomodate such a large lens. I will probably buy a larger camera bag soon.

I purchased the camera, 18-70 zoom lens, memory card and battery from Wolf Camera. The other items I picked up at B&H Photo-Video. Two of the lenses and the flash had mail-in rebates. I also got a free HP PhotoSmart 335 printer because of a special offer just for the week of Memorial Day.

I'm having a blast taking photos with with camera and learning how to use it. I'd like to thank David Hill and Rod Cole for their help choosing the right equipment.
Posted by Unknown at 16:04