Last night I installed new front and rear derailleurs on my bike. I had to replace them because they had both become bent, probably due to impact with rocks or stumps. I decided to upgrade to slightly better components from the Shimano Deore XT line. Below, you can see the the new rear derailleur. 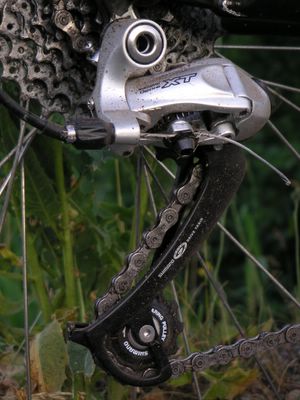 I chose to get the "rapid rise" version of this derailleur. With a rapid-rise derailleur, downshifts are effortless and upshifts require effort.

The derailleur works this way because the spring in the derailleur is set up so that it naturally pushes the derailleur up to a larger cog. This arrangement is also called low normal. Typical rear derailleurs have a spring that pushes down toward the lowest cog (top normal). With a rapid rise derailleur, when you push the lever with your right thumb, you work against the spring to move the chain to a lower cog (a higher gear); and so it's shifting to a higher gear that requires a bit of physcial effort. This makes sense, because it's when you need to downshift that you have the least energy and time to spare. The shifting that requires physical effort is saved for the sections of trail where you can relax a bit, namely the downhill or flat sections.

Another advantage of having a rapid-rise rear derailleur is that both front and rear shifters work in the same way: you pull to downshift and push to upshift.

Here is the new front derailleur. Less exciting, but still an improvement over what I had before. 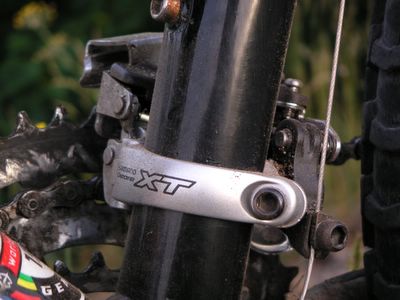 I opted to use a new chain because it will be a bit stronger than a chain that has been broken and put back together.
Posted by Michael A. Lowry at 22:38