Tonight I went to Filmstaden Sergel to watch the new Miami Vice movie. In the square outside the cinema, Moderate party leader Fredrik Reinfeldt was shaking hands and signing autographs. 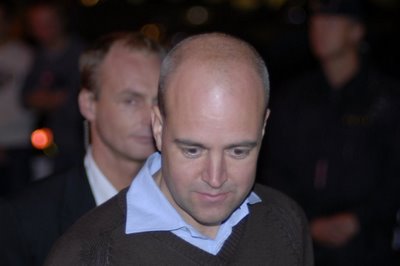 I asked him the following question:

“Does it make sense to for an erstwhile Moderate voter to cast a vote for any of the other Alliance parties, just to ensure that the party gets the minimum 4% of the vote required to be represented in parliament?”

He replied that all four of the parties in the Alliance are pretty much assured of getting more than 4% of the vote in tomorrow's election, and that it thefore makes sense to vote for the specific party that most closely matches one's views.

I enjoyed the final debate between party leaders last night on SVT. I look forward to casting my vote tomorrow morning. This will be my first time to cast a vote in a national election here in Sweden, so I am excited about it. If it's possible, I will capture a photo of the polling place, and post it here tomorrow around lunchtime.

By this time tomorrow night, we'll know who will lead Sweden in the coming four years.