The weather on Friday was just lovely. It was warm and sunny, almost like yet another late Summer day. Hey, I'm not complaining. 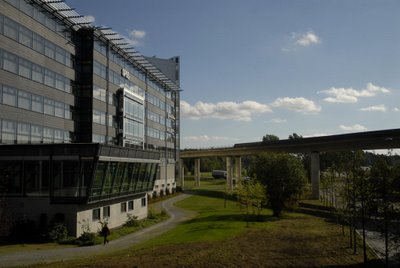 Around lunch time, I had a meeting at Kista Entré, a new glass-and-steel building in the Southern end of the Kista busines district. I spoke with some colleagues about a project in which I hope to be involved. The subject matter is right up my alley, so I'm really looking forward to learning more about it.

I wasn't sure if I'd be able to concentrate during the meeting though, because my back was still giving me trouble. But then at some point during the meeting, the spasms stopped altogether. When I left the building, the problem had almost entirely disappeared. 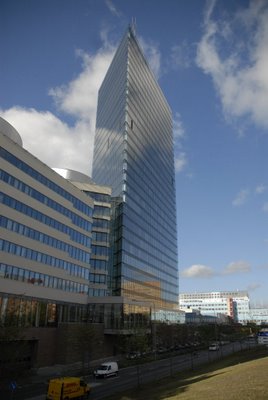 On the way back, I captured this shot of Kista Science Tower. Just in case the problem with my back returned, I bought some muscle salve at the pharmacy.

With my back functioning again, I took advantage of the fact that I was in Kista, and picked up a 10-kg bacg of Basmati rice at Kista Grossen. 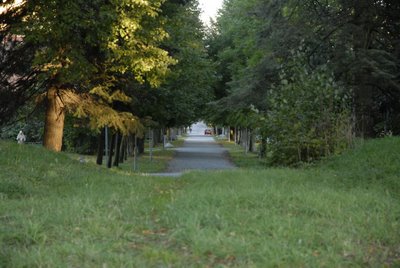 In the late afternoon, I went to Pulsen Education (just ten minutes' walk from my home) to verify the setup of the classroom in which I will teach a course next week. On the walk back home, I captured this view of Bergshamra Allé. 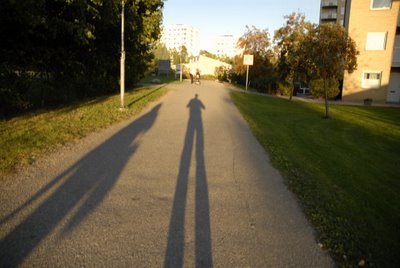 I walked toward the ICA store to buy some groceries. The sun was very low on the horizon, and cast long shadows.
Posted by Michael A. Lowry at 10:58