My certificate of Swedish citizenship

Here is the certificate I received a week ago. 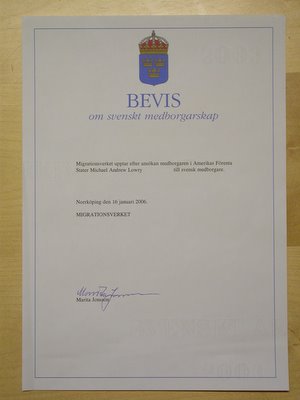 It seems to be a rather old or formal sort of Swedish, and I must admit I'm not familiar with this particular usage of the the verb att ta upp. To come up with a concise translation using my knowledge of Swedish and English, I'll have to fiddle with word order a bit. I'll do my best. A rough English translation follows:


And here is a close-up of the seal at the top. I rather like the design, in case you hadn't noticed. 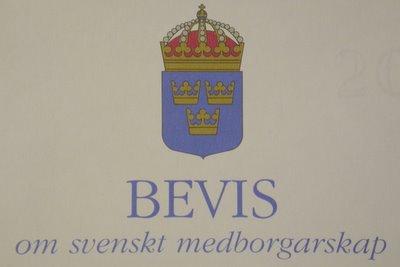 On Monday, finally made my way to the police station on Kungsholmen (a nice building, by the way) and applied for my passport. I waited in line about 5 minutes, and was then called to the counter. It took about 2 minutes to apply. Each of the positions along the counter had its own digital camera mounted on a vertical rack, such that the person behind the desk could move the camera up or down. The girl behind the desk took a photo of me and collected the 400 SEK fee. She asked how tall I was and whether I wanted my country of birth listed on the passport. She explained that the passport would be ready in about 5 workdays, and that I would have to return to the police station to fetch it.

I know that technically I am already a Swedish citizen. Even so, I think it will feel more real once I have my Swedish passport in my hands. There is something nice about having a piece of tangiable proof of an accomplishment or achievment.
Posted by Michael A. Lowry at 15:46