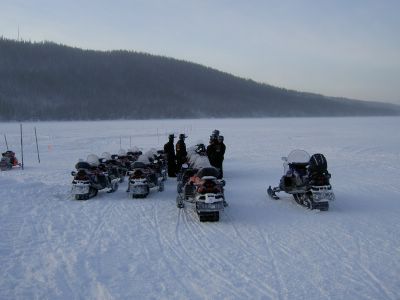 On Thursday we took a snowmobile “safari.” We began at the dock below Camp Åre, behind the new Holiday Club hotel. 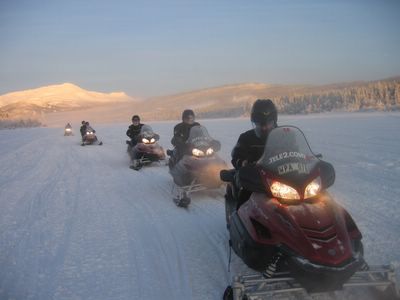 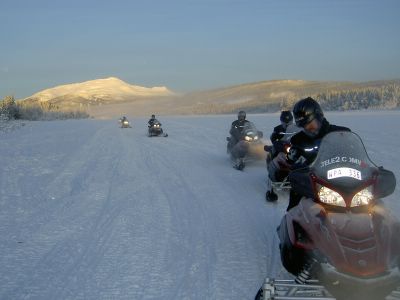 We started out by driving across the lake and down the length of the side opposite the ski resort. 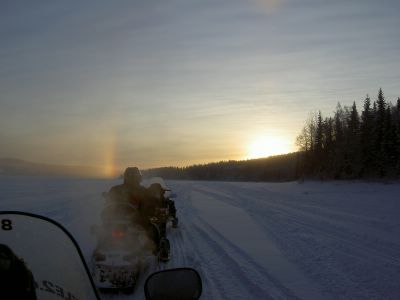 And here's another shot looking forward toward the Southwest on near the far shore of the lake. 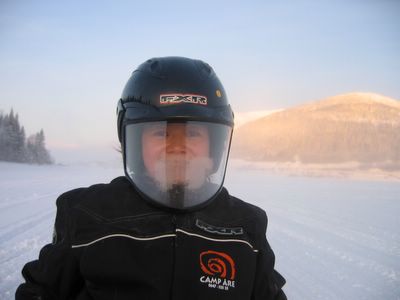 Lisa rode with me. She seemed to have a good time! 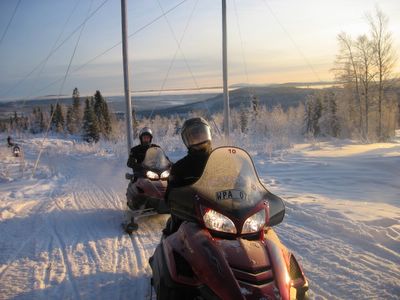 Once we reached the end of the lake, we turned to the right and drove along a trail that followed some power lines uphill. 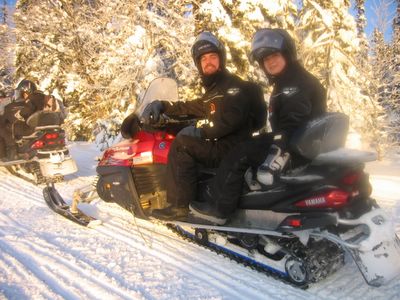 The snowmobiles were very nice Yamaha machines. They even had heated handlebars for the driver and passenger, and a heated accellerator trigger for the driver. 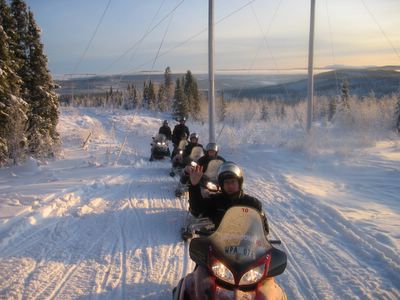 The folks running the tour explained that they had tested these 1000cc machines up to 180 km/h, but had limited them to 120 km/h for the sake of safety. They have incredible torque at low revs. With a bit of a bump in the trail, the snowmobiles could be launched from a complete standstill up into the air with a quick pulse of the trigger. The trail was quite bumpy, so I did this many times. The machines had quite a good suspension system, and they seemed to handle the bumps with ease. 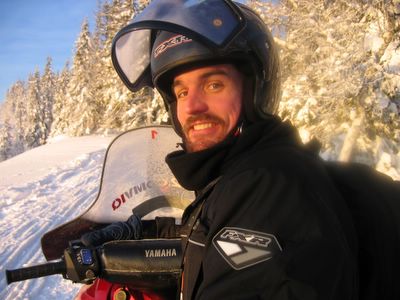 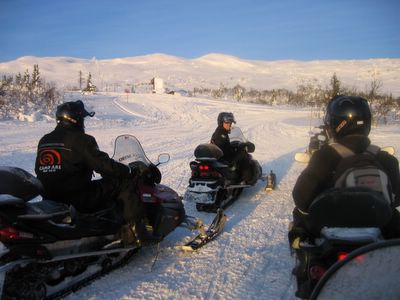 As we climed, the trees thinned out and we emerged above the tree line onto the barren area above. 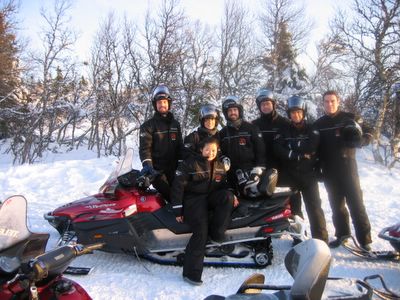 We stopped at a cabin to pose for a group photo. 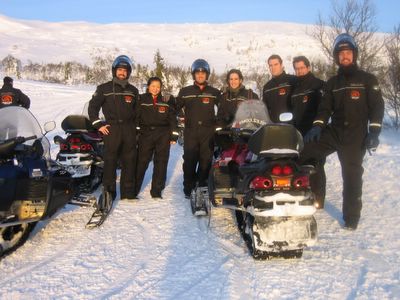 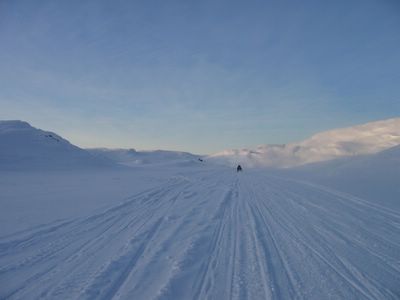 On the straightaways, it was possible to get quite a bit of speed. 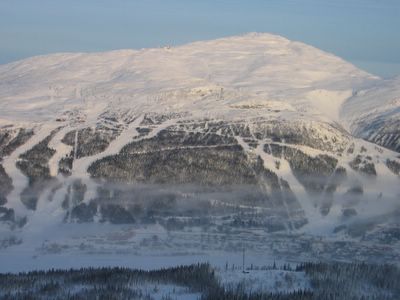 From the top of the peak, we could see the whole ski resort of Åre across the lake. 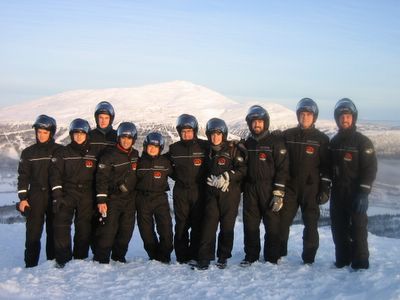 Naturally, we posed for another group photo. 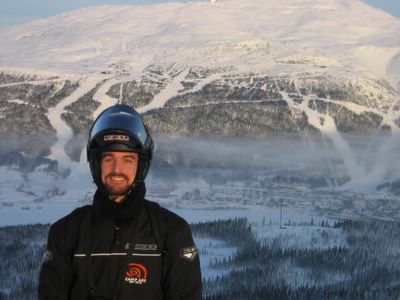 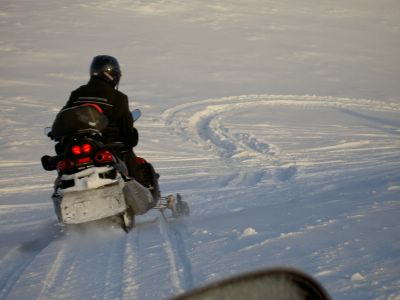 On the way down, we went through some deeper snow. 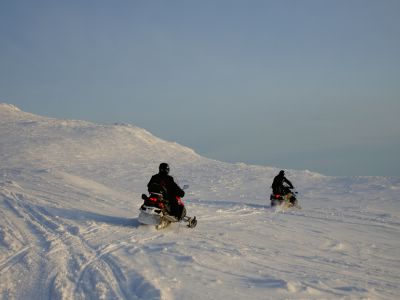 It's more fun, but also more difficult, to go off the beaten path. 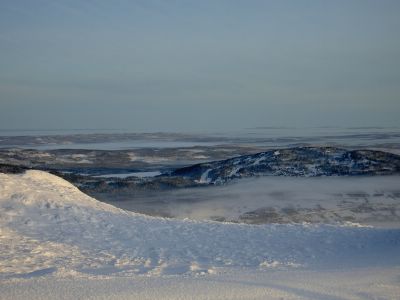 The views from the top were really incredible. 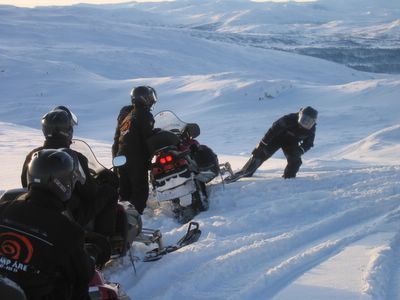 A few times, we almost tipped over on a turn or in deep snow. The vehicles aren't the most stable mode of transportation. Here one of the guides helps extract a snowmobile from thick powder. 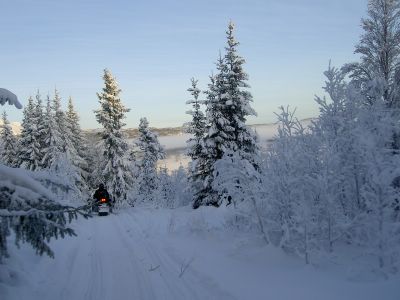 The trip back down to the frozen lake took us through the forest via a different trail. It was a bit steep in some places. 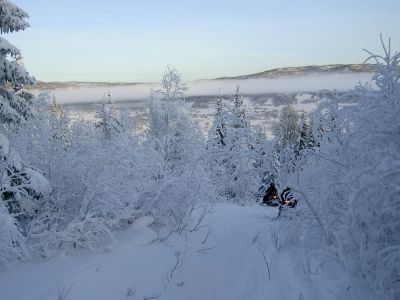 With all the snow-covered trees, it was also a bit hard at times to see the drivers in front of you until you were right on top of them. 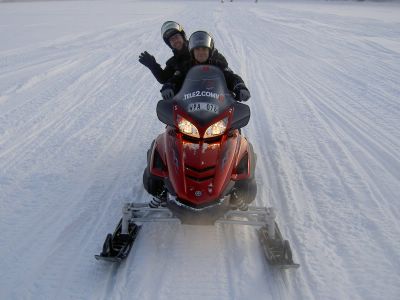 Back at the lake, we raced across to the Åre side and then back down the length of the lake toward the town. 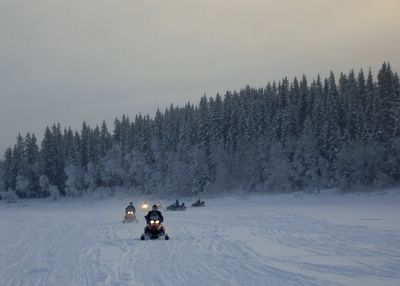 I'm not sure how fast we were going because I didn't dare glance down at the spedometer. At the fastest point, it took all my concentration to keep the snowmobile going in a straight line; and even then I didn't have the trigger depressed more than two thirds of the way. I estimate we were going about 100 km/h. There were not too many bumps on the return trip, so unfortunately (or fortunately), we didn't get much air on the way back. 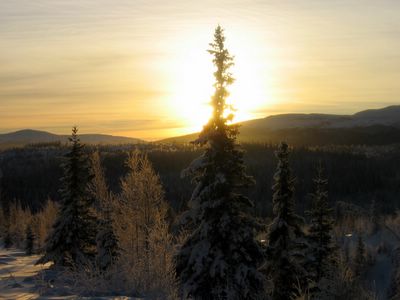 The snowmobile excusion was easily the most exciting part of the trip. It was well worth the cost, and I'll definitely do it again the next time!
Posted by Michael A. Lowry at 13:24