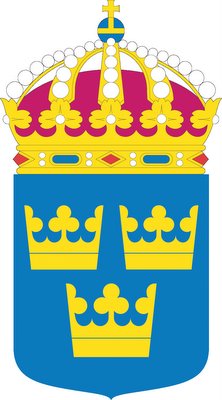 This morning I went to the post office to pick up a pice of registered mail. In the envelope was something I've been looking forward to for several years: my certificate of Swedish citizenship. As of Monday 16 January 2006, I am a citzen of Sweden.

Both the U.S. and Sweden now allow dual citizenship, and I remain a citizen of the United States. Also, because Sweden is a member of the European Union, I may now live and work in any of the E.U.'s member states. Moreover, I may move away from Sweden and move back at any time. It feels really great to have the freedom to live where I like.

Tomorrow morning, I will go by the police station on Kungsholmen to fill out the paperwork and have a photo taken for my Swedish passport. The new passports are machine-readable and contain biometric data in accordance with the standards set forth by the U.S. government in 2002.
The certificate of citizenship I received this morning is adorned with the seal depicted to the left. This seal is the smaller of Sweden's two official coats of arms (in English).
The larger coat of arms is used primarily by the royal family and by those people and government agencies who represent Sweden abroad (e.g., Swedish embassies).
The smaller one depicted here is used by many state agencies. Some use a slightly different version of the seal. One notable example is the Swedish police.
Posted by Michael A. Lowry at 13:24

Congratulations to the new Swexan! We are looking forward to a visit from a citizen from Sweden.