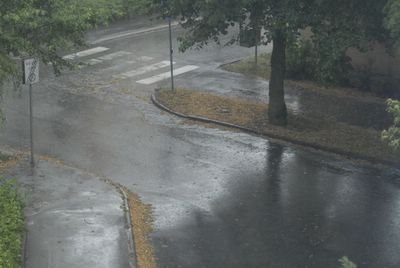 Saturday morning we had a proper downpour here in Stockholm. Heavy rain, thunder, lightning — you name it. It reminded me of the storms we have in Texas. We needed this rain; it has been a dry summer here. 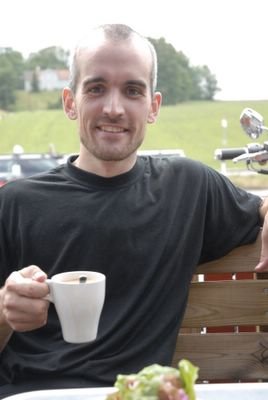 In the afternoon though, the rain cleared off and I went for a long bike ride with Lotta & Elina. About two-thirds of the way through our ride, we stopped at a cafe for coffee and sandwiches. 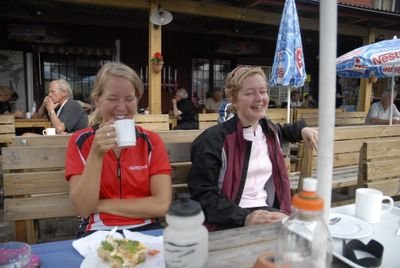 Lotta was explaning to Elina what it's like for a Swede to be a part of one of my family's large gatherings in the U.S. — a bit of culture shock, but fun too. 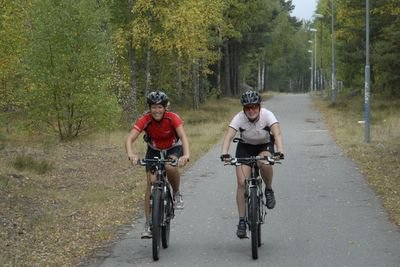 I sprinted ahead at one point so that I could snap this photo of the girls. 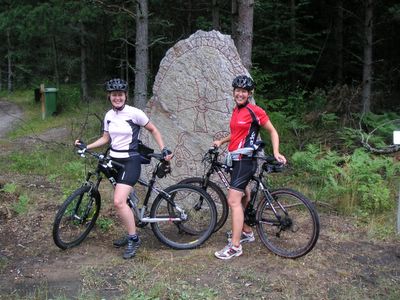 They also posed in front of an old runestone we passed along the way. 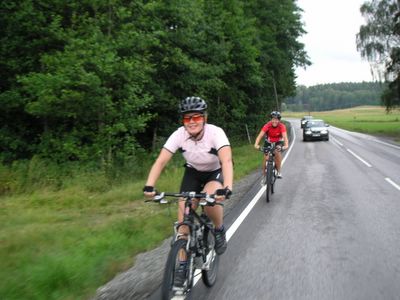 I took this photo while biking. It was one of many that I took, and the only one that looks good. :) 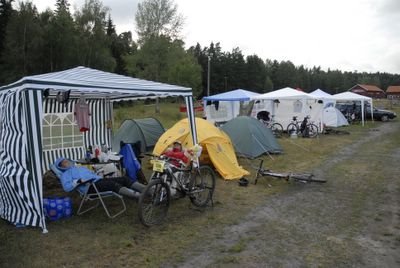 After our ride, Lotta and I said goodbye to Elina and we went over to Rudan, where the 24-hour bike race Sömnlös i Rudan had just gotten under way. Most of the competitors worked as teams, taking shifts in the day-long race. But some were actually doing the whole twenty-four hours individually. Crazy! 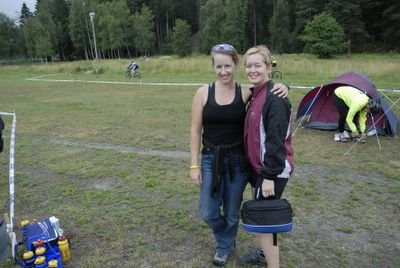 Anne and Lotta standing by the race track. 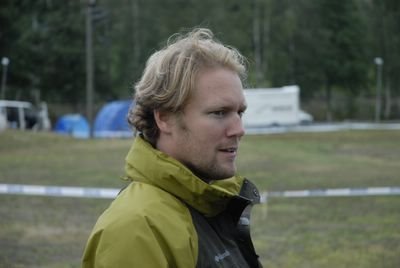 Mattias, who helped me with my bike last summer. :) 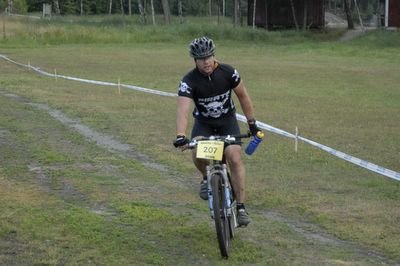 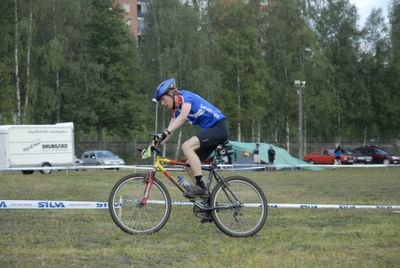 Someone I don't know who has a bike very similar to mine — a Gary Fisher Hoo Koo E Koo. 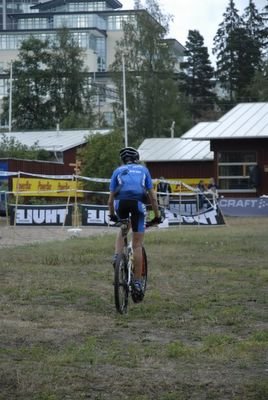 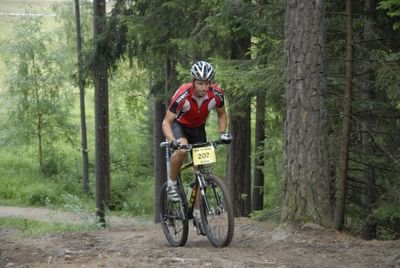 There is a big uphill stretch just near the lap start line, so Lotta and I walked up the hill and cheered on the bikers making the tough ascent. 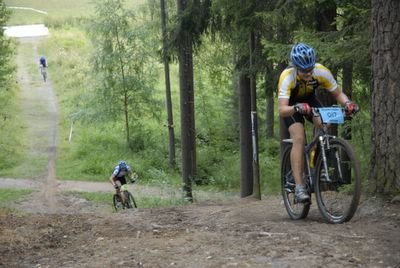 It is harder than it looks! 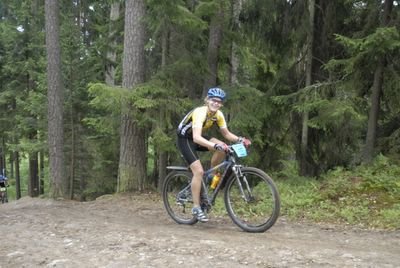 Even so, this chap was making conversation with us the whole way up the hill! Way to go, dude! 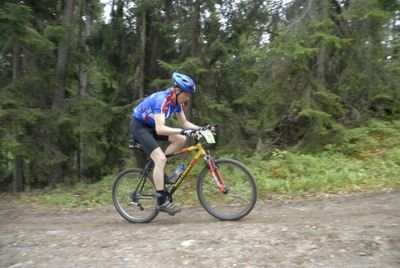 Here's the guy on the Gary Fisher bike again. 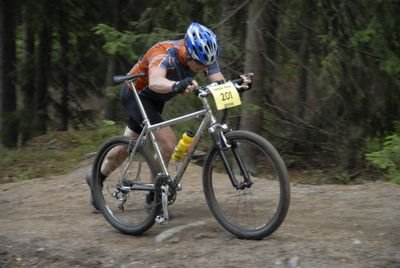 If you don't bike all the way, at least run uphill. That's the spirit! 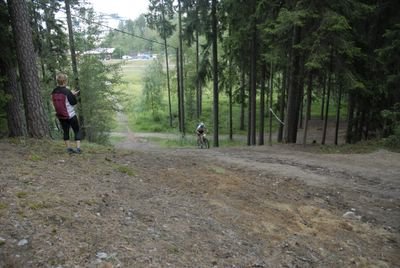 Lotta has now biked a couple of MTB races, so she was cheering the bikers on enthusiastically. 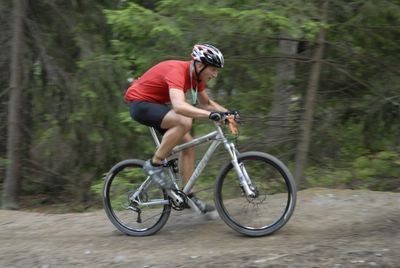 Some folks just seemed to have energy to spare, and stormed up the hillside like it was nothing. 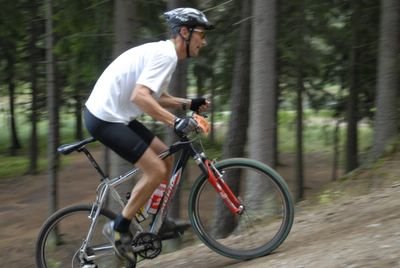 Maybe I should seel these photos to the manufacturers of the bicycles! Not bad, eh? 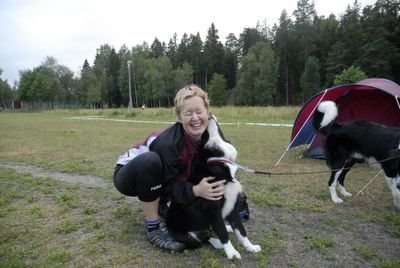 Back at base camp, Lotta made a new friend. 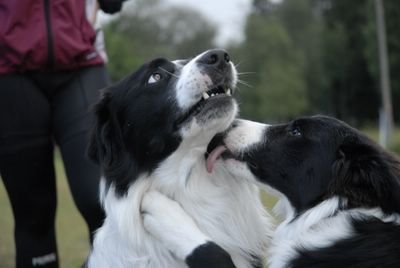 Two friends, in fact. One of the folks there had two adorable and affectionate border collies. 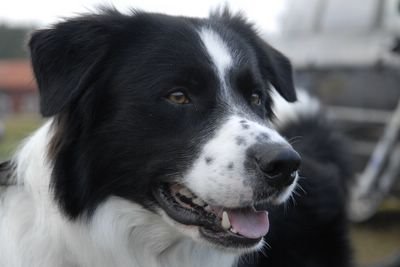