Well, I did it! I completed the Stockholm Marathon in a time of 4:50:57. I wasn't sure I could really do it until I passed the finish line. 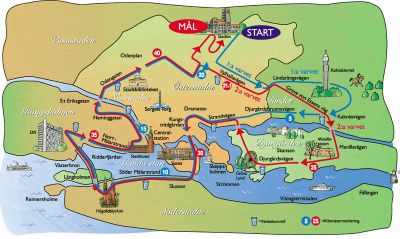 The first lap was relatively easy. Lotta and Lisa were stationed at the Studenterna tent near Rålambshövsparken, right after Västerbron. They cheered me on and took some photos. I kept going and didn't notice any pain in my legs until around km 20, but then I started feeling the soreness my joints, particularly my knees and hips. Near the end of the first lap, I saw Daniel & Jenny and Åsa & Kevin. They cheered me on and gave me a much needed boost of confidence going into the second lap. The loop through Djurgården in the second lap seemed much longer than the loop through Gärdet in the first lap, probably because it is longer. Whatever the reason, the Djurgården part of the race seemed to go on for too long, and this was a bit depressing. It was really hard to keep going, but somehow I managed.

As I started to run down Strandvägen in the second lap, I got a sharp pain in my left knee. The pain just suddenly came out of nowhere mid-stride. I limped for a few steps and noticed that the pain got eaiser to bear with each additional step. So I stopped limping and put equal weight back on the left leg. After each successive step, the pain subsided a little bit more. After just 50 or 100 meters, the sharp pain was gone.

The pain — duller, but still annoying — came back occasionally. I fought through it though. Every time the pain reappeared, I sped up instead of slowing down. Just as in my 28 km run a few weeks ago, this trick worked. Each time I sped up, the pain diminished. It seems counter-intuitive, but it worked.

Sometimes duing longer runs, I have gotten a popping feeling in my right foot with each step; one positive surprise about this race was that I never felt the popping sensation.

I did my best not to slow down to walk except at the official refreshment stops. Every 5 km or so, there were tables set up with sport drink drink, water, and wet sponges. One has to slow down to pick up the refreshments, so one might as well wait and save one's rest times for those drink stations. I kept to this plan pretty well. I also stopped to pose for photos for Daniel and Åsa at the 40 km mark.

The last two kilometers actually went quite quickly. I never saw the 41 km marker, and the next thing I knew, Stockholms Stadion was at the end of the road up ahead, so I just fought on.

When I entered the statium for the final 200 meter stretch, I was so elated to have the goal in sight that I began to sprint. I ran faster and faster, passing everyone in sight. I got an amazing boost of adrenaline, and all the pain disappered instantly and completely. I don't think I've ever felt anything quite like it. It was amazing. I went even faster. I couldn't even feel the ground beneath my feet, and I felt like I was running on clouds. For a few precious moments, it seemed to take no additional energy to go faster. I felt like I could run as fast as I wanted to. It was really a remarkable experience. I crossed the finish line going full speed, with a silly grin on my face, and with my arms held high in the air.

I picked up my medal and staggered to a railing, where I stopped and caught my breath. The pain returned, but after a bit of stretching, most of the muscle cramping was over, and all that remained was my poor sore joints. I picked up my t-shirt and post-race snacks and drinks. After a few minutes of rest and a change of clothes, I met Daniel & Jenny for a beer at restaurant near Östermalmstorg.

Then, I headed home, had a shower, and fixed pizza for dinner. I'm going to sleep well tonight.

I hope to have some photos soon. The race's official photographer, photomotion.se, will also have photos from the race online on Tuesday.

Update: Daniel has a couple of photos of me from the marathon on his weblog.
Posted by Michael A. Lowry at 00:38