Climging again, and riding my bike in the snow.

This afternoon the temperature dropped below freezing again, and there was a nice light snowfall outside the window adjacent to my desk. I glanced outside occasionally and watched the snow accumulate outside, gradually obscuring the black metal rooftop with a layer of soft white snow.

I got away from the office a bit later than expected, and so I rushed home. I picked up some groceries for the weekend and a drain plunger at ICA and then went home to change into my cold weather clothes and bike shoes. I packed my climbing gear in my backpack and headed downstairs. After putting a bit of air in my tires, I started out, riding my bike through the newfallen snow. I still don't have proper snow tires for my bike, but the ordinary off-road tires work well in snow, provided it's not too hard and icy.

It took about 15 mintues to ride the 3 or 4 kilometers to Klättercentret. I nearly lost my balence skidding to an abrupt stop to let a car go by when crossing Hagavägen. I had a good time climbing, and managed to conquer one bouldering route all in one go that I had only been able to handle picemeal before. I taped my fingers thoroughly this time; I have learned that it's better to tape my fingers BEFORE I lose a big flap of skin, rather than AFTER. Lisa and I climbed with Pontus and Johannes, two guys we've seen there many times before. 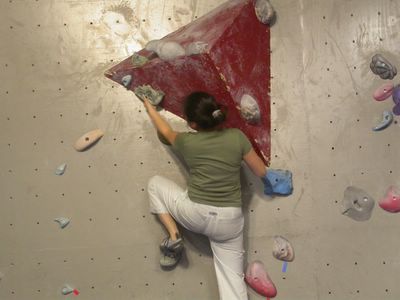 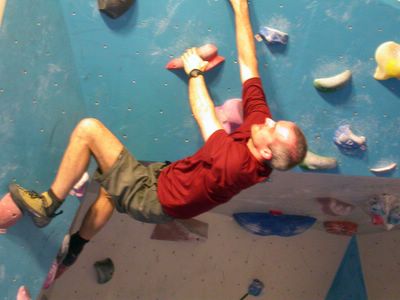 After climbing, I walked with Lisa as far as Solna Station, where our paths home diverge. I rode the rest of the way home and enjoyed the still-falling snow.

When I got home I administered one final dose of caustic soda to the obstinate clogged drain in the kitchen and then used the new plunger to finish the job. Luckily for me, it worked. Now I can finally do my dishes!

Tomorrow, Åsa comes home from her nice trip in Indonesia. In fact, she's on the plane to Amsterdam at this very moment. I plan to go shopping for a microwave oven and perhaps a toaster, and then the plan is to meet Daniel & Jenny for a drink or two. Sunday I'll go skating again on Edsviken if the ice and weather conditions permit, and Sunday night the plan is to head to O'Leary's sports bar to watch the Super Bowl. This leaves tomorrow morning to get some much-needed rest and perhaps even clean house.

It occurred to me the other day that if I ever were to meet somone I wanted to invite over, it might be nice to have a welcoming home. Having a clogged kitchen sink has rather delayed my efforts in this regard, but with luck I'll be able to address the matter presently.

My neck and shoulders are still sore from climbing so I should probably do a few stretches before turning in.
Posted by Michael A. Lowry at 22:43