I went dancing last night at La Isla. It had been about 2 months since I did any salsa dancing so I was a bit out of practice. But the basic moves came back to me after a few minutes. The ones I remember the most easily are the standard Rueda de Casino moves.

I saw some familiar faces, but not too many. There were a lot of people there I had never seen before. Also, the place has changed quite a bit since I was there last. They added a disco ball and two blacklights, so the dance floor has more of a nightclub feel than before. The blacklights make one look like a zombie out of Michael Jackson's Thriller video. And the hundreds of little flashing beams of light cast by the disco ball are a bit distracting. Overall, it's less easy to dance with the new lights. But the music was good and the people friendly.

I caught the number 4 buss from Fleminggatan to Valhallavägen; there I took the red subway line from KTH home. There were workers in the subway station repairing the tracks. They usually do that sort of maintenence work late at night. 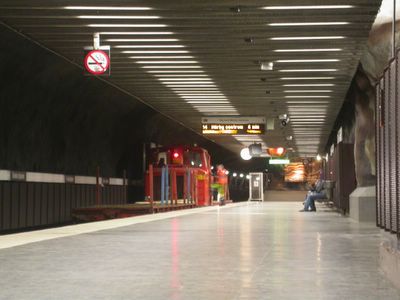 Today I awoke feeing like I was coming down with a cold. After cup of coffe and some breakfast, and I was back to normal though.

There is a stubborn clog in the drain of my kitchen sink. I have removed the water trap and cleaned out the pipes the best I can. But the drainpipe below where the water trap goes is still clogged. I have used caustic soda and boiling water, and even a long piece of wire in an attempt to loosen the clog. So far, no dice. I'm thinking of buying a long wire drain unclogger thingy at the hardware store this afternoon. Good things to have, those.

Today I've been working from home. It's nice to be able to do that because I can keep my cats company. Also, I can prepare an inexpensive lunch rather than spending 70 kronor at a restaurant in the city. Today I'm eating leftover chicken curry from last night. I can say that it's not easy to prepare food without a working sink. Also, I don't have a microwave because Lotta took it when she moved into her new place a few weeks ago. I've been meaning to get a new microwave and toaster, but so far I haven't found ones I like. They're either too flimsy and appear as though the might fall apart after one year's use; or they're adorned with pieces of pointless metal-colored plastic trim. My message to appliance manufacturers is this: