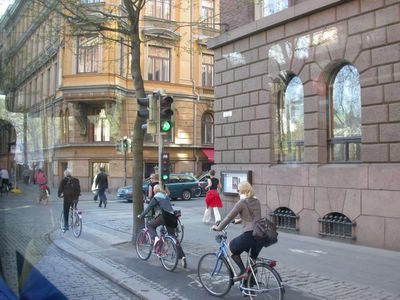 On the tram this morning, on the way to the IBM office in Munkkiniemi. 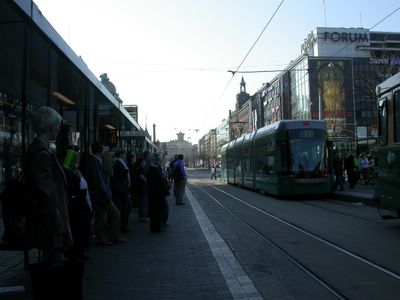 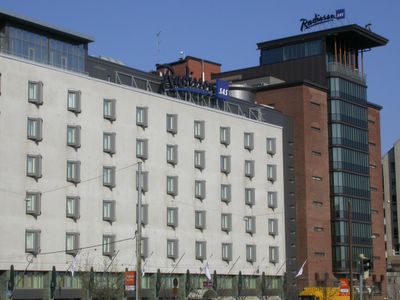 My hotel. The sauna with a view is up at the top. And guess what? You have to book it in advance, and it costs 200€ per hour. I opted for the viewless sauna downstairs. Maybe next time when I'm here with 20 of my frieds, we can rent the fancy one. 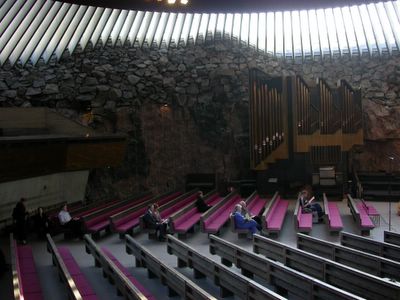 Tonight I went to a concert at the famous Rock Church, Temppeliaukio. This amazing church is built right into a granite hill in the middle of Helsinki. 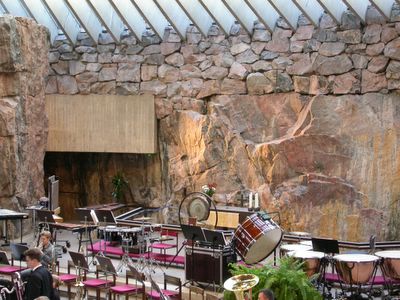 I arrived at 18:30, half an hour before the concert was scheduled to begin. So I had time to walk around and take some photographs of the interior of the building. 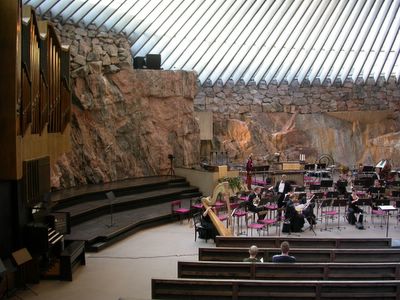 The circular roof is solid only in the center. Around the edge of the roof is an annulus of tall vertical windows between the concrete support beams. 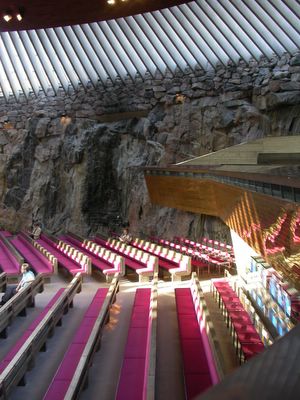 In the rear of the churh is the main entrance and a small balcony. Copper is used extensively for accents on railings and pews, and is covers the underside of the center of the ceiling. 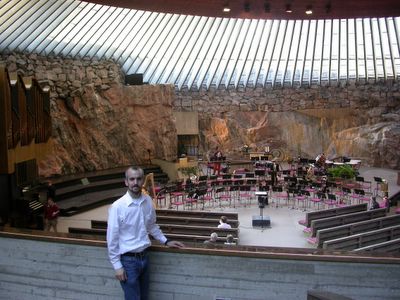 Here's a self portrait taken from the balcony. As you can tell, the church is round, and the roof is circular; but the interior is not entirely symmetrical. The pews and balconys are longer on one side of the center than the other. 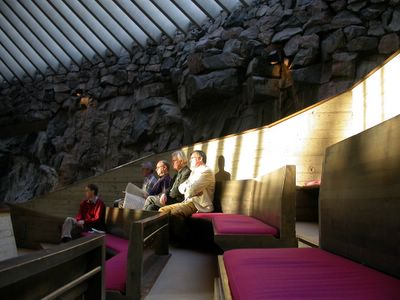 Here's the right side of the balcony, illuminated by the last rays of the setting sun, beaming in from the windows in the ceiling on the opposite side of the church. 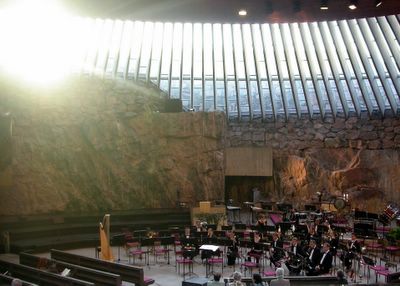 There you can see the sunlight pouring in through the high windows. The rock wall is higher on that side, so the windows are shorter. 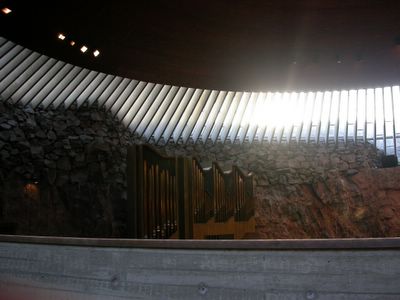 The organ is also located on the left side. In this photo you can also see that concrete is one of the primary construction materials. In a way, the interior of the church very spartan; but the warmth of the pink granite and red copper, when combined with the large amount of light permitted, lend an atmosphere of serenity to the space. 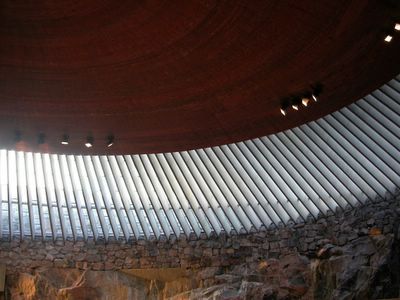 Here you can see the copper ceiling. It looks like a single strand of square copper wire, spun in a gigantic spiral. 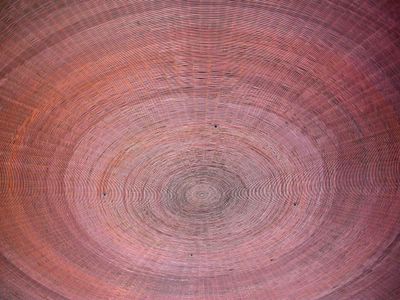 Here is a closer view of the center of the ceiling. 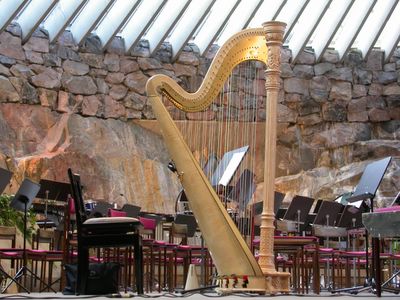 Mom, I took this photo for you. I think the harp must be from the same manufacturer that made yours. 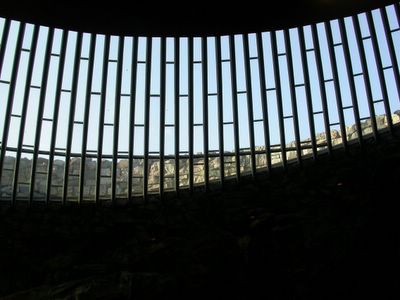 The stacked rock wall that supports the inside of the the dome appears to continue outside the dome. The effect is quite convincing. One can easily imagine that this place simply grew naturally out of the stone hillside. 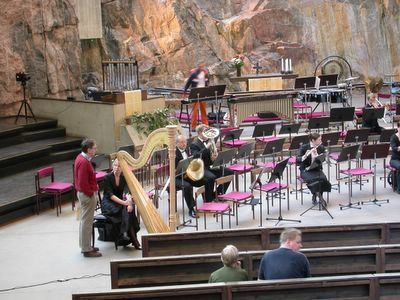 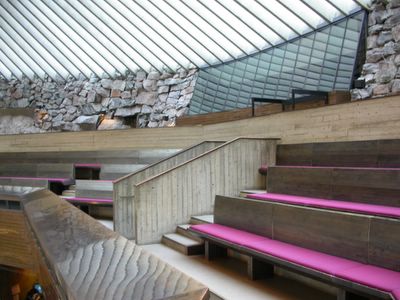 The rear of the balcony, and the stairway going down. 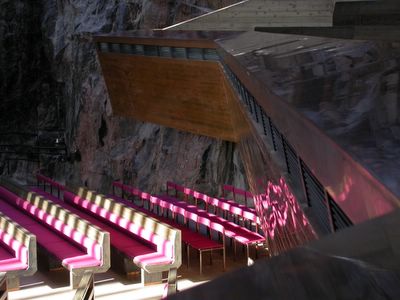 A better view of the copper accents on the balcony. 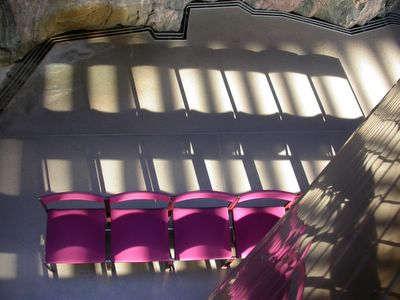 Looking down from the back of the balcony. 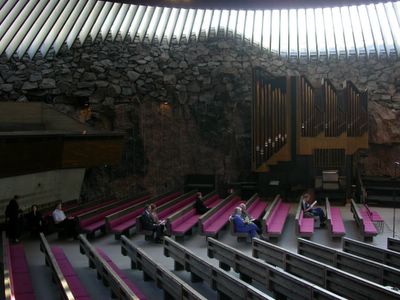 The left side of the church, including the organ. 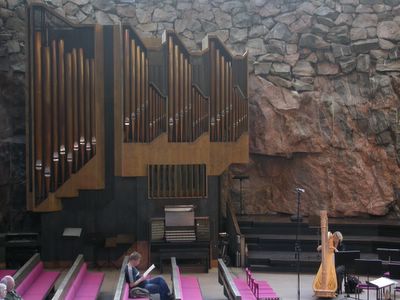 A close-up of the organ, with the harpist rehearsing in the foreground. 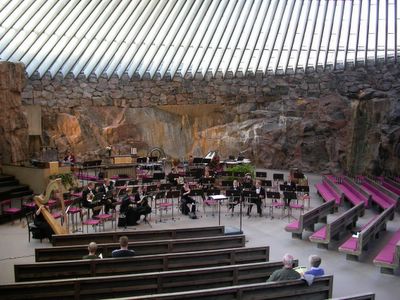 Here is one more wide-angle shot. 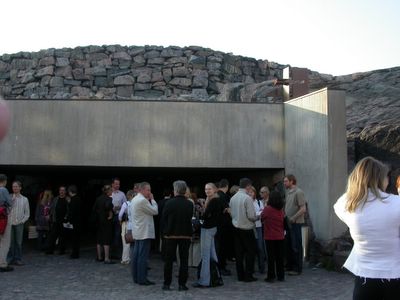 At intermission, people mingled outside. I spoke with a friendly German couple who had been living in Helsinki for three years. On their advice, I sat in the balcony for the second half of the concert. Apparently, the accoustical properties of the space result in a different sound on the balcony, and they thought that that was a better place for listening to orchestral music. 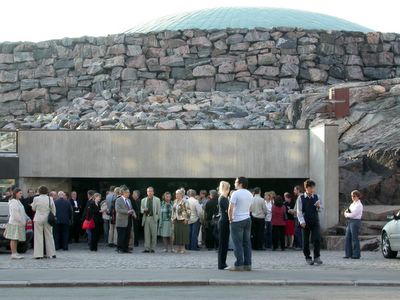 Here's another exterior view with the dome visible. 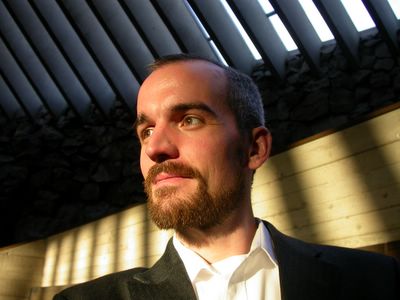 The concert was very good. I particularly enjoyed the second piece played, a modern and powerful Saxophone Concerto by Jukka Linkola.

My favorite though was the piece they saved for last, Leoš Janáček's Sinfonietta from 1926, with its memorable tympani line. I read some background information about the Janáček piece. Did you know that the fifth and final movement is subtitled The Streets of Brno? I was there just last year, and I had only a vague recollection that the composer had lived there. Janáček spent a good part of his life in that city, so I suppose it shouldn't come as a surprise that he saw fit to honor it in music.

Both pieces brought a big smile to my face, and I was even moved to tears by a couple of passages. I'm a sucker for good music!

By odd coincidence, I sat in the sauna tonight with a man from Slovakia. I told him about the delicious halušky s brynzou dish I enjoyed in Brno last year. He informed me that it is the Slovakian national dish, and was invented by shepherds. No wonder it's so filling.

Ok, now I'm in trouble. I can't get that Janáček trumpet fanfare out of my head! I had better go to sleep anyway. It's midnight here. From Helsinki with love. I'm signing off.
Posted by Michael A. Lowry at 23:03