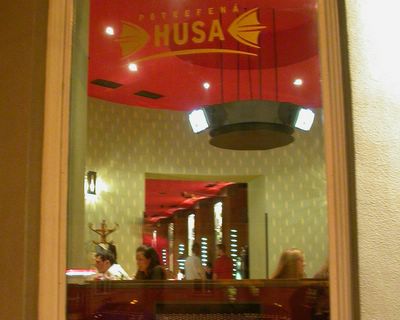 At the recommendation of some of the students in my class, I tried the beer and food at the Potrefená Husa restaurant in the center of Brno tonight. The place has the feel of a brewpub, and it's very obviously associated with the Staropramen brewery. I learned that Staropramen means old stream in Czech. I also learned that one does not order a Pilsner beer in a pub run by Staropramen. You might get away with calling any old lager a "pils" in Sweden, but not here. In these parts, Pilsner beers come from Plzeň and only from Plzeň. Once I realized my mistake, I clarified: "A tall glass of Staropramen would be grand, thank you!" I started out with a glass of Granát, a smooth medium red lager. I sipped this beer as I perused the menu and while I waited for my food. I then ordered a glass of Černý (a darker beer) to accompany my meal. For dinner, I had halušky s brynzou, a delicious dish combining potato dumplings with cured meat and sauerkraut. The starch in the potatoes is perfectly compliemnted by the sour taste of the cabbage; the meat, rubbed with black pepper, gives it flavor. It was very tasty! I can give this dish (and the restaurant) a hearty recommendation. 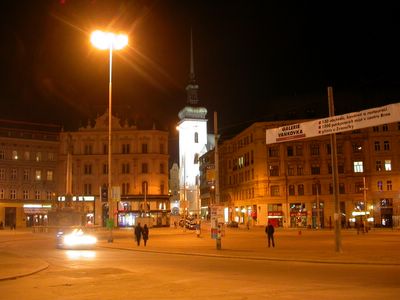 After my very filling meal, I took a walk in Brno's city center. Here's a photo of the square right in the middle of town. 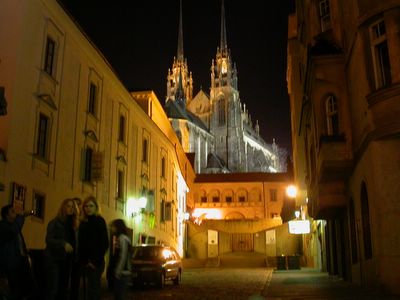 And there's a big cathedral on a hill near the center. It's quite imposing, although the effect seems to be lost on the teenagers who are eyeing the photographer with what must be bewilderment, suspicion, or a combination of the two. 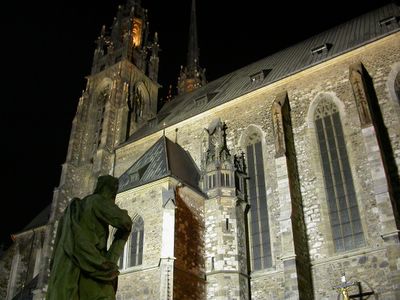 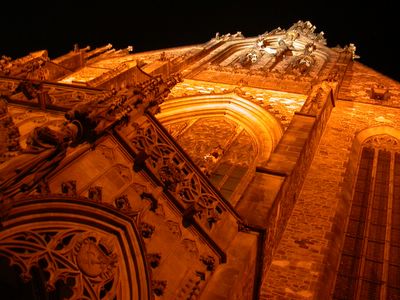