Here is my attempt at the fourth and final of John Langdon's four elements ambigrams, Water: 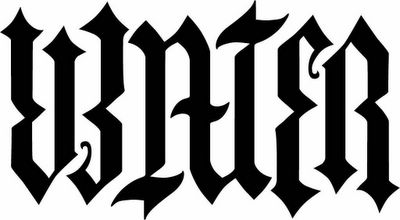 I guess that this was probably the most difficult of the four to design. Making the w/er combination work must have taken a lot of tinkering. The at/ta combo is really impressive too. It's particularly interesting how the top of the t serves as a base for the letter a, and does so in a way that does not hurt the readability of the a. The crossbar in the letter a works really well too. It sticks out to the right of the letter a just as much as it intrudes into the interior of the letter; and yet this does not detrimentally affect the appearance of the a. These tricks are very subtle an take a lot of practice and intuition. John Langdon has talent!
Posted by Michael A. Lowry at 16:34