Skating on Edsviken on the vernal equinox

Considering my lack of success finding a place to skate yesterday, I thought I should give it one more try today. Today is the vernal equinox, so Spring is on its way. The weather forecast calls for warmer temperatures in the coming week, so today may be my last opportunity to go skating!

I had read online that there was a track plowed in the snow on Edsviken, but when I walked yesterday with Tobbe and Martina to Ulriksdals Slott, we saw no plowed track. 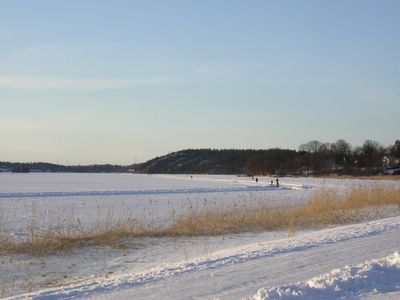 I learned that the path plowed in the snow on Edsviken is in the North half of the lake, betwen Sätra Äng and Jungfruholmen. So today I took the bus to Sätra Äng and made three laps around the 6 km track. The weather was perfect, as you can see in this photo taken from the shore at Sätra Äng. 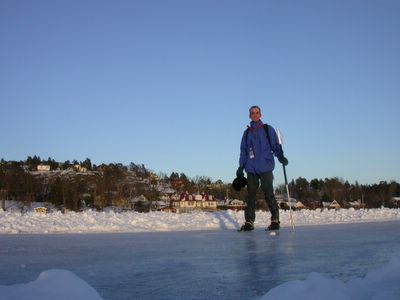 Because I was alone, I took a photo of myself by resting the camera on the snow beside the track. 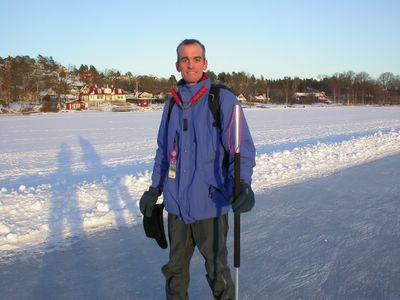 A few seconds later, another skater agreed to take a couple of photos of me. 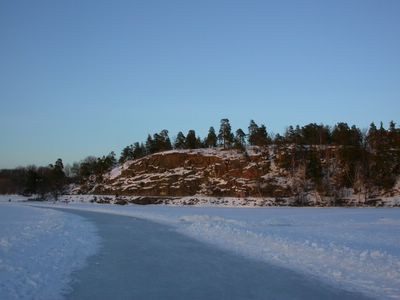 As the sun began to set, it cast a warm orange glow on the cliffs on the East side of the lake. At the base of the cliffs you can see a walking/biking trail. I've biked around this lake before, but I haven't yet worked up to a point where I'm ready to run 22 km. The Stockholm Marathon is about 9 weeks away though, so I need to start training in earnest soon. 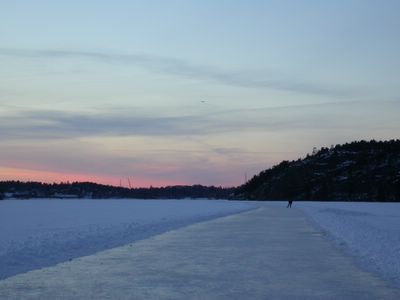 After the sun set, the ice seemed to changd from dark to light in color, reflecting the glowing sky. The temperature dropped rapidly after sunset, and I got a little chilled waiting for the bus. I just missed a bus by less than a minute, and I had to wait 30 minutes for the next one. I was glad when it came.
Posted by Michael A. Lowry at 21:44